A 30-minute conversation may be one of the riskiest COVID-19 activities. Here’s why quiet is a key virus-fighting strategy.

Talking loudly spreads more potentially virus-laden gunk than being quiet. Boisterous, long conversations should be considered a risky activity during the pandemic. A new study conducted in Singapore found that having 30 minute conversations upped the risk that people might catch the virus from someone they lived with. But that […] 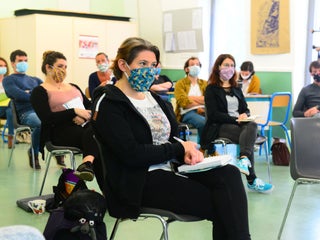 When ordering a carbonated beverage, Northerners call it soda, in the Midwest, it’s “pop,” and Southerners prefer to say “coke.” It’s just one example of the countless regional word variations in the US. Some experts specialise in analysing regional word variations across America, including University of Wisconsin-Madison’s Dictionary of American […] The American Dialect Society named “tender-age shelter” the 2018 “Word of the Year.” The term was used by the US government to describe facilities designed to house babies and young children who have been separated from their parents at the US-Mexico border, due to changes in the Trump administration’s immigration […] Facebook’s secretive hardware group made an armband that lets you ‘hear’ through your skin. It’s a key part of the company’s bigger plan to embed computers in our bodies

Researchers from Facebook’s clandestine and ambitious consumer hardware group known as Building 8 created an armband that transforms words into understandable vibrations. The work is a key component of the company’s aim to create the world’s first brain-machine interfaces – devices that essentially embed our phones or laptops in our […]

Americans have different words for soft drink depending on which region of the United States they’re from. The three most popular terms are soda, pop, and coke, according to data collected by the site Pop Vs. Soda. Linguists have noted other terms people from certain regions use for soft drinks, […] Movies like “Star Wars,” “Ghostbusters,” and “Clueless” are celebrated as classics. They also have made some surprising contributions to our vocabularies. Common words popularised by movies include “catfish,” “my bad,” and even “toast.” Movies have long influenced the way people talk, and sometimes, it’s in ways we don’t even realise. […] The Winter Olympics are being held in the South Korean city Pyeongchang. All promotional material, and local media outlets, refer to the city as PyeongChang, with a capital C. The new spelling was introduced in 2007 to differentiate the host city from the similar-sounding North Korean capital Pyongyang. Media have […] From Barbara Streisand to Al Pacino, Bernie Sanders to Donald Trump, New Yorkers have made their legendary dialect the most recognisable in North America, according to sociolinguist William Labov. But it’s more than just “fuhgeddaboutit” and “yuuuge” that set New York English apart – there are more subtle features in […] The American Dialect Society named “fake news” the 2017 Word of the Year. It said President Donald Trump helped change the definition of fake news from disinformation presented as news to “actual news that is claimed to be untrue.” Meanwhile, “alternative facts” was named Euphemism of the Year and “covfefe” […] In a country as vast as the United States, you’re hardly ever going to find a consensus on how to say something. Do you drink soda, or do you call it pop? Do you wear sneakers, or tennis shoes? The answers vary depending on where you ask the question. Linguists […] Donald Trump and other Republicans often say “Democrat party” instead of “Democratic Party” as an insult. Use of the insult goes back decades, and George W. Bush caused a stir when he used it in 2007. Intentional or not, Trump’s usage of it could further stoke partisan divisions. For years, […] The surprising effect 9/11 had on the English language

The September 11, 2011 attacks changed American life in many ways. They even had an effect on our language, in that they changed how people talk about terrorist incidents. Linguists have noted how the name people assigned to the attacks, “9/11,” is now a blueprint for naming other terrorist incidents […] Turn on Fox News on any given night, and you’ll hear pundits blasting illegal aliens, radical Islamic terrorism, and corporate regulations. Change the channel to MSNBC, and you’ll hear talk of undocumented immigrants, jihadism, and consumer protections. The two networks are talking about the same issues, but they’re using strikingly […]