The Los Angeles Galaxy honoured Kobe Bryant in its first home game of the season by wearing jerseys with specially embroidered patches. The patches, which are also worn by Bryant’s former team the Los Angeles Lakers, featured the initials “KB” alongside a singular white star. The jerseys are now signed […] 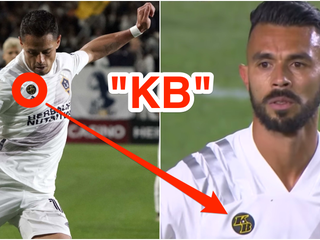 Zlatan Ibrahimovic announced his departure from LA Galaxy with a tweet on Wednesday. His departure marks the end of Ibrahimovic’s two-year stint with the Galaxy, which saw him dominate as one of the most electrifying stars in MLS. It’s unclear what the future holds for Zlatan, but chances are whatever […]

US women’s national team (USWNT) star Alex Morgan announced that she and her husband, Los Angeles Galaxy midfielder Servando Carrasco, are expecting their first child. In her Instagram post, Morgan revealed that the couple is having a girl and that she’s due in April of 2020. As expected, many in […]

Zlatan Ibrahimovic says he wants to move to SSC Napoli so he can “replicate” the achievements of Diego Maradona and help it lift its first Serie A title in three decades. Maradona scored 26 times across two seasons for Napoli during both 1986/87 and 1989/90, helping the team win Serie […] Zlatan Ibrahimovic slammed the MLS structure, and it could be an attack on American sports in general Zlatan Ibrahimovic’s wife only lets him hang one picture of himself at home, and it’s not even of his face

Zlatan Ibrahimovic is only allowed to hang one photo of himself at home. This is because his wife says there is “already enough talk” of him and it is enough that she sees him in real life, so she does not want him on her walls. The picture Ibrahimovic chose […] Chants of the word “puto,” which is commonly seen as a homophobic slur, were recently heard at an L.A. Galaxy game on the team’s “Pride Night.” Despite the word’s reputation, it remains popular among fans, especially in Mexico, who insist upon its harmlessness. Chants of the homophobic slur “Puto” were […] Zlatan Ibrahimović has received his first red card as an MLS soccer player. The LA Galaxy striker slapped an opponent and then tried to con the match official by faking an injury. But Ibrahimović’s really bad acting failed to convince the video assistant referee, who informed the official of the […] Zlatan Ibrahimovic announced his arrival in MLS with two stunning goals to help the LA Galaxy comeback to win 4-3 after being down 3-0. His first goal was a blast from 38 yards out, just five minutes after he took the field as a substitute in the 71st minute. Ibrahimovic […] The former Manchester United striker Zlatan Ibrahimović has announced his arrival to the LA Galaxy with a full-page advertisement in the Los Angeles Times. The ad has just five words: “Dear Los Angeles, You’re welcome.” The ego has landed. The former Manchester United footballer Zlatan Ibrahimović placed a huge advertisement […] The ACE Family showed off pricey furniture and renovations before their...