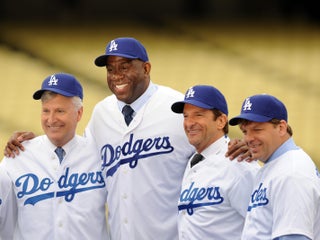 Videos capture the terrifying moment sports games and a live newscast abruptly stop during the 7.1 magnitude earthquake in California

Videos shared on social media captured the powerful, preliminary 7.1 magnitude earthquake, which shook areas in Southern California, Nevada, and Mexico on Friday evening. A live newscast on KCAL-TV was also abruptly put on hold after the earthquake hit the newsroom: Visit Business Insider’s homepage for more stories. A game […] On Monday night Dodger’s rookie Yasiel Puig proved again why he is already one of the most dynamic players in baseball. The 22-year-old hit .319 in 104 games with year while showing some crazy catches and unbelievable throws. He has also been benched over immaturity issues. Puig showed his extraordinary […] [credit provider=”ESPN”] Mark Cuban is on a hell of a roll right now.But could he possibly take that roll to another level and buy the LA Dodgers? Could The Los Angeles Dodgers Become A Publicly Owned Franchise?

[credit provider=”Flickr Dirk Hansen” url=”http://www.flickr.com/photos/dirkhansen/4837167158/in/photostream/”] Dodger fans are so fed up with the McCourt ownership during their ugly divorce, that momentum has picked up to try and turn the Dodgers into a publicly owned enterprise a la the Green Bay Packers.City Councilwoman Janice Hahn has been leading the push for […] Jamie And Frank McCourt, Now In Court: Here’s A Primer On The Nastiest Billionaire Divorce Ever

Now that the divorce trial of LA Dodgers owner Frank McCourt and his estranged wife Jamie is underway, it’s time to revisit our earlier primer on the proceedings… [credit provider=”AP”] Latest on the nasty billionaire divorce.  Catch up on the background here > By GREG RISLING, Associated Press Writer The Nastiest Billionaire Divorce Ever: Jamie And Frank McCourt*