The street is part of a Japanese-themed town located outside the city of Dalian that cost locals nearly $1 billion to build. 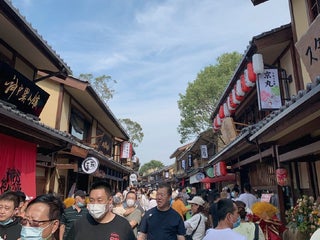 This Japanese snack shop has been serving roasted rice cakes to Shinto worshippers for over 1,000 years

For almost 25 generations, one family has made roasted rice cakes for Shinto worshippers at Ichimonjiya Wasuke in Kyoto, Japan. 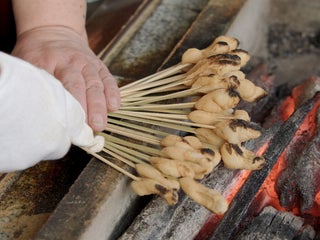 Shopkeepers in Kyoto are sharing photos of empty landmarks that are usually overrun by tourists, and it shows the effects of the coronavirus on tourism in Japan

Japan received a record 32 million visitors in 2019, approximately one-third of whom were Chinese. But tourism in Kyoto is taking a hit amidst fears of the coronavirus spreading, and a group of local shopkeepers is sharing photos of empty landmarks that are usually overrun by visitors. Japan is one […] 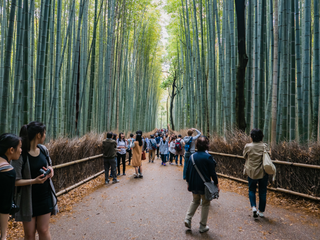 The mayor of Kyoto wrote a letter to Kim Kardashian-West on Friday, urging her to “reconsider” trademarking her new shapewear line, “Kimono.” Mayor Daisaku Kadokawa wrote that national initiatives are already underway to register “Kimono culture” with UNESCO’s Intangible Cultural Heritage list, as it is an asset to be “shared […] 12 places you should visit in Japan that aren’t Tokyo

Although Tokyo is a fascinating place to visit, Japan offers many other interesting towns and cities. Japan has a lot to offer in terms of activities and environments since it’s made up of so many islands. Other good Japan destinations include Kyoto, Osaka, Naoshima, Hakone, and Kamakura. When planning a […]

This restaurant sets your ramen on fire The futuristic pods look like something from a sci-fi movie. Kyoto was recently named the best city in the...