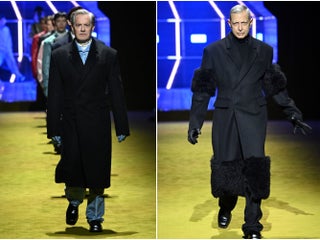 INSIDER has decided on its best-dressed men of 2018. The list is full of actors, musicians, models, and anyone who has had an influence on the everchanging winds of men’s fashion. Scroll down to see who made the list and why. 2018 has been a turbulent year in many ways. […]

Ariana Grande gave her seal of approval to Jeff Goldblum’s ‘Thank U, Next’ spoof

Ariana Grande tweeted her approval of James Corden’s “Thank U, Next” parody called “Thank U, Jeff.” The spoof video, which aired on Wednesday’s “The Late Late Show,” featured Corden singing about his admiration for Jeff Goldblum. “omg…… may i please….. please for christmas have the thank u, jeff book?” Grande […]

There’s a 25-foot statue of Jeff Goldblum in ‘Jurassic Park,’ shirtless, in London

A huge statue of Jeff Goldblum appeared near London’s Tower Bridge Wednesday. It is part of a marketing stunt by Now TV and in celebration of the 25th anniversary of “Jurassic Park.” Does it feel like something is missing from your life? Not anymore. There is a 25-foot statue of […] Legendary actor Jeff Goldblum talked to Business Insider about voicing a character in the stop-motion animated movie, “Isle of Dogs,” which marks his third time working with director Wes Anderson. Goldblum also opened up about why he believes he still hasn’t delivered his career-best work yet. It kind of makes […] Here’s how Jeff Goldblum thinks men should answer when women ask ‘Do you like my outfit?’

Here’s his advice for men everywhere. Jeff Goldblum Strips To His Undies In Hilarious ‘Infomercial’ For GE Jeff Goldblum gave the best wedding gift of all...