Flooding in Jakarta is so bad the government is planning to move the city 100 miles away. Here are photos of the devastation.

A rising sea and sinking land will likely cause parts of Jakarta to be under water by 2050. Heavy rains over the weekend caused more than five feet of muddy water to take over commercial and residential areas of the city. Here are photos of the devastating floods. Visit Insider’s […] 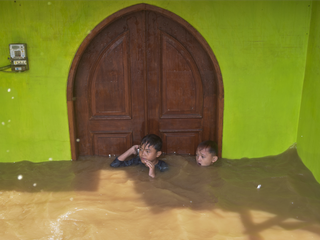 Indonesia wants to spend $33 billion to move its sinking capital hundreds of miles. Here’s what the flooded city looks like.

Parts of Jakarta, Indonesia’s capital city, could be underwater by 2050 due to a devastating combination of sinking land and sea level rise. The Indonesian government plans to address the issue by moving Jakarta 100 miles away from its current location. The project would require a $US33 billion budget, but […] Indonesia has approved a plan to move its capital city away from Jakarta. The move could take 10 years and cost up to $US33 billion, and was described by the country’s planning minister as “visionary.” Indonesia is one of the world’s fastest-sinking cities and suffers from major congestion problems. The […]

As global temperatures and sea levels rise, some of the world’s major cities could experience unbearable living conditions. Cities like Chicago and New Delhi have already endured fatal heat waves, which could get worse in the future. While climate scientists don’t anticipate any location will become fully uninhabitable, they worry […] Most world capitals are the biggest cities in their countries. Some capitals offer a better bang for your buck when it comes to travelling. Using a list of the most affordable capitals and the most popular travel destinations of 2018, we compiled the list of budget-friendly capital cities everyone wants […] The uneasy peace between Malcolm Turnbull and Scott Morrison has been shattered with the former prime minister effectively branding his successor a liar. Mr Turnbull has taken issue with Mr Morrison after the Prime Minister claimed Mr Turnbull’s two-day mission to Jakarta was to represent Australia at an oceans summit, […]

Government officials in Jakarta, Indonesia covered the polluted Sentiong River with a black net ahead of the 2018 Asian Games. The black mesh net installed earlier this month is supposed to hide the smell and appearance of the river. But locals have accused officials of trying to cover up the […]

VIDEO: The moment the floor of the Jakarta Stock Exchange collapsed, injuring at least 72 The Saudi king just arrived in Indonesia on a golden escalator

This young entrepreneur is turning trash into fuel

Jakarta has a huge trash problem, and this local man may have found the solution. Indonesian police have endorsed a new anti-terrorism game app allowing people to fight militants from the January 14 terror attacks in Jakarta. The arcade-style game app, Tumpas Teroris — “Annihilate Terrorists” — was developed by Adji Pratama in response to the attacks and is aimed at children as young as […]