"A team leaving out Jadon Sancho twice must be phenomenal in attack," tweeted The Athletic's Raphael Honigstein. 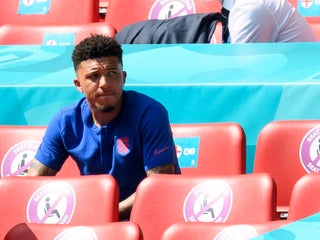 Borussia Dortmund trolled Manchester United on Twitter after it confirmed star player Jadon Sancho would not be leaving for England this summer. Sancho, 20, has been heavily linked with a transfer to United in recent months, however Dortmund’s sporting director ruled out a move in a statement on Monday. “We […] 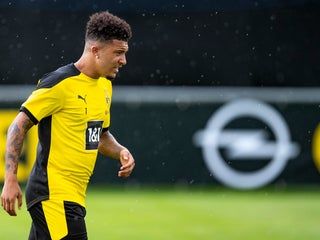 Europe’s most valuable teenage footballer feels ‘scapegoated’ for his side’s poor start this season, despite being its most effective player

Jadon Sancho, Europe’s most valuable teenage footballer, feels “scapegoated” for Borussia Dortmund’s poor recent form, reports The Athletic. Two weeks ago, the 19-year-old was substituted after just 36 minutes for being “not good enough”, while last month he was dropped and fined $US110,000 for returning late from international duty, according […] Borussia Dortmund sporting director Michael Zorc has conceded that Jadon Sancho will leave the club, subsequent to rumours linking him with Real Madrid and Manchester United. Sancho has managed 18 goals and 29 assists in just 64 games for Dortmund, seen his transfer value rise to an estimated $US222 million, […] A number of the world’s biggest soccer stars have expressed unhappiness at their ratings on FIFA 20. EA Sports released a list of the top 100 players in the game on Tuesday, and have also been revealing individual players ratings throughout the month. Pierre-Emerick Aubameyang, Jadon Sancho, and Gabriel Jesus […] Jadon Sancho, a 19-year-old who has been compared to Neymar, is now worth far more than the declining Paris Saint-Germain super forward

Jadon Sancho joined Borussia Dortmund in 2017 for just $US9.7 million – today he is valued at $US222 million. The 19-year-old set the Bundesliga alight last season, scoring 12 goals and assisting 14 as Dortmund finished second behind Bayern Munich. “He is quick, technically gifted, and he can score goals […] A prominent think tank in Switzerland has released a power ranking of the most valuable youngsters in world soccer. To produce the list, the CIES Football Observatory monitored soccer transactions for almost a decade, spoke to market actors, and studied other factors to determine a player’s worth if he was […] Jadon Sancho, a forward with a direct soccer style born in England’s streets, has seen his transfer value skyrocket in the last three months. This is because the 18-year-old has been lighting up the Bundesliga with exciting, match-winning performances. Rated as a €9.7 million ($US11 million) player earlier in the […]