Harrison Ford posted a moving tribute to Chadwick Boseman: ‘He is as much a hero as any he played’

In a statement to The Hollywood Reporter on August 31, Harrison Ford said that Chadwick Boseman “is as much a hero as any he played.” Ford starred with Boseman in the 2013 baseball drama “42” about Major League legend Jackie Robinson, who Boseman played. Ford said: “His intelligence, personal dignity […] 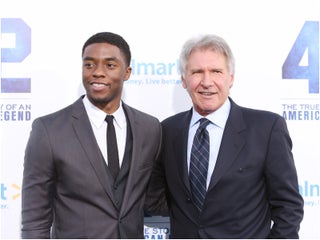 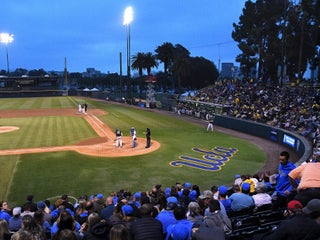 A commemorative Jackie Robinson Day hat from the Cleveland Indians drew sharp criticism and has already been removed from the MLB online store. The controversy is centered around the use of Chief Wahoo, a logo deemed racially insensitive to Native Americans, being displayed on a hat that is supposed to […] With the Baltimore Orioles game against the... Carl Crawford wore a different coloured shoe on each foot. The stars showed up to honour number 42. It’s unclear why it took Hollywood so long to make a proper movie about Jackie Robinson, one of the great Americans of all-time. But a look at the trailer below for ’42,’ which is due out next summer makes it seem like the wait may have been worth it. This $1.7 Million House On Jackie Robinson’s Former Estate Has A Baseball-Glove Shaped Pool

[credit provider=”www.realtor.com and commons.wikimedia.org” url=”http://www.realtor.com/realestateandhomes-detail/95-Cascade-Rd_Stamford_CT_06903_M32542-64369″] A Stamford, Connecticut home that sits on Jackie Robinson’s former six-acre estate is up for sale at $1.695 million.Robinson built the estate in 1955 when he played for the Brooklyn Dodgers. After his death it was divided into four lots. CHART OF THE DAY: The Number Of Black MLB Players Dips Again

The headlines will all read that the percentage of black players in Major League Baseball is down in 2011 and at the lowest mark since 2007. But if we look at the long-term trend, the number of black players has remained steady for the past 10 years. On this date 64 years ago, Jackie Robinson made his debut with the Brooklyn Dodgers, playing first base, and going 0-3 with a run scored.