Segio Giorgi - the father and coach of tennis player Camila Giorgi - grew angry and glared from the stands, prompting an umpire to call for backup. 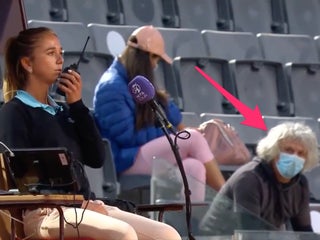 Rafael Nadal powered past Novak Djokovic 6-0, 4-6, 6-1 in the Italian Open final on Sunday. It was the first time a “bagel,” a set won to love, had ever been won in the Nadal – Djokovic rivalry. Djokovic will have been fatigued from finishing a semifinal late on Saturday. […] Nick Kyrgios is out of the Italian Open after he threw a chair onto the court, packed his bag, and walked off in the middle of the match

Nick Krygios got kicked out of the Italian Open on Thursday. The 24-year-old bounced back from a first set loss to take the second, had the crowd on his side, but then fell apart in the third. Kyrgios was slapped with a game penalty for apparent swearing, then threw a […] Nick Kyrgios trolled rivals Novak Djokovic and Rafael Nadal during a podcast interview with a prominent tennis journalist. Kyrgios called Djokovic “cringeworthy” because of the way he celebrates, and said Nadal is “salty.” All three athletes are competing in this week’s Italian Open, as they prepare for the highly-anticipated French […]