I ate at the oldest Italian restaurant in the US, and it was one of the best dinners I’ve had in a while

Located in Philadelphia, Ralph’s opened in 1900 and is the oldest Italian restaurant in the US. On a Saturday, I scored a reservation and had one of the best dinners I’ve eaten in a while. The chicken Parm reminded me of my Italian grandmother’s home-cooked meals. Visit Insider’s homepage for […] 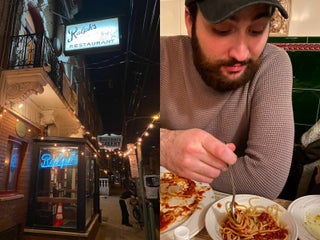 A “BYOT” restaurant is opening in London this summer. That stands for “bring-your-own-table” – and you’ll get a free six-course meal if you sign up. It’s being created by Birra Moretti, with the intention of “bringing people together around tables.” Tables of all kinds are welcome, from picnic and patio […] The mayor of Bologna, Italy, says spaghetti bolognese does not exist

Spaghetti bolognese does not exist, according to the mayor of Bologna, Italy. Although the dish is supposed to hail from the city, the mayor says this is in fact “fake news.” The meat-based sauce Italians actually eat is called ragù and is rarely served with spaghetti. When it comes to […]

This restaurant stuffs its garlic knots with whole cloves of garlic