One of YouTube’s most popular creators, Mark “Markiplier” Fischbach, took a stand against the platform on Friday with his video titled “YouTube has a huge problem…” Fischbach said “hundreds” of his fans were suspended from their YouTube and Google accounts after “spamming” emotes, YouTube’s emojis, per his direction in his […] The most pervasive conspiracy theory of 2019 is that wealthy sex offender Jeffrey Epstein was murdered, despite the official determination that he died by suicide in prison awaiting trial. The popularity of the meme shows a growing distrust in the rich and powerful and appeals to numerous American political factions. […] As deepfake videos and the technology to make them become more widespread and accessible, the possibilities for digital trickery are endless (for better or for worse). In a surprising twist, a video posted on Twitter of a child wearing a Deadpool costume turned into a deepfake of “Deadpool” actor Ryan […] Food videos are booming on YouTube – from mukbangs to challenge videos to recipes – and with media giants like BuzzFeed and Condé Nast pumping out mouthwatering content, the genre has become a staple of the average YouTube user’s experience on the platform. Unlike the mainstream food channels and cult […] A YouTuber with little makeup experience is about to rake in millions with his new beauty collection, showing the power of viral fame

The YouTubers Shane Dawson and Jeffree Star are poised to make millions off their Conspiracy Collection makeup launch on Friday, which is already inciting long lines at malls across the country. Star commands a major makeup line, but Dawson is the other face of the project, driving its popularity with […] Jaclyn Hill had a messy year following her disastrous lipstick launch that left customers complaining of injuries and contaminated, broken products. The YouTuber and beauty guru persisted through the scandal, and has been updating her channel regularly since. Hill threw her annual Halloween party at her LA mansion this year, […] Todrick Hall is an entertainer who rose to prominence after making it to the semi-finals on “American Idol” and becoming a popular YouTuber, then transitioning to mainstream entertainment with “RuPaul’s Drag Race,” the starring role in “Kinky Boots” on Broadway, and by collaborating with Taylor Swift. Hall is now facing […] Model, author, and TV host Chrissy Teigen aired her frustrations with the conspiracies surrounding her, her husband John Legend, and the late Jeffrey Epstein on Twitter. Teigen says it’s “not great” that she has to read daily accusations that she and Legend are pedophiles who were affiliated with Epstein before […] A Lisa Frank hotel pop-up sold out in less than an hour. An independent artist says it’s a rip-off of her Insta-famous apartment.

An independent artist known for her vibrant home decor has accused a hotel pop-up of copying her designs without crediting or compensating her. Amina Mucciolo lives in a pastel paradise of her own design in downtown LA. Her personal home decor, which she calls her “Cloudland” installation, went viral in […] During the final “Fortnite” season 10 event, the server powered down, leaving millions of people watching a blank screen to see what comes next. The official “Fortnite” Twitter account tweeted out “This is The End,” leaving many fans to believe that the gameplay map that has existed for the wildly […] Gaming is a $US120 billion industry, and live video game streaming constitutes a growing slice. Twitch pioneered the idea of a game-streaming platform, with YouTube and Microsoft’s Mixer emerging as its major competitors. Now, Facebook Gaming is coming out as a force of its own, and streamers who have switched […] Makeup mogul and YouTuber Jeffree Star announced Saturday that his dog Daddy had died. On Friday, Star tweeted that Daddy would be undergoing emergency surgery for a liver abscess. Despite making it out of surgery, Star says Daddy passed away early Saturday. Read more stories like this on Insider. YouTuber […] Nikkie de Jager, better known by her beauty YouTube channel Nikkie Tutorials, announced a new eyeshadow collaboration with Beauty Bay. In the product reveal video, De Jager compared the launch to her disastrous Too Faced palette, which Jeffree Star previously revealed De Jager only made $US50,000 from, despite him claiming […] 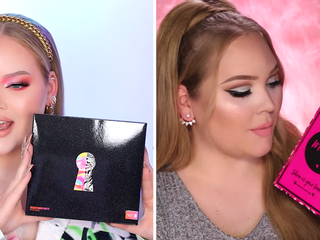 The second episode of Shane Dawson’s 9-part “documentary” series with Jeffree Star dropped Friday. Despite much-anticipated drama and tea, the first two episodes have largely been underwhelming. It appears that most of the series will be oriented around the launch of Dawson’s own makeup line, rather than about the highly […] Hannah Hart has been one of the most recognisable figures on YouTube since she rose to early internet stardom with her “My Drunk Kitchen” series. Hart, 32, has since gone on international tours, published two best-selling books, appeared in three feature films, and hosted multiple web and TV series since. […]

Greta Thunberg responds to ‘haters,’ asking why adults ‘spend their time mocking and threatening teenagers and children for promoting science’

Greta Thunberg, the 16-year-old climate activist from Sweden, delivered a fiery, tearful speech to world leaders at the United Nations Climate Action Summit this week. She also filed a legal complaint against five of the world’s biggest carbon emitters. Thunberg has faced severe backlash, especially from conservatives in the US. […]

President Donald Trump on Monday sarcastically addressed the 16-year-old climate activist Greta Thunberg’s impassioned speech at the United Nations Climate Action Summit, where she said: “How dare you! You have stolen my dreams and my childhood with your empty words.” Trump quote-tweeted a video of Thunberg’s speech and captioned it: […] Fans of the show “SpongeBob SquarePants” noticed that Saturday’s episode, “SpongeBob in RandomLand,” featured a terrifying cameo from an internet meme that started with a “creepypasta” called “Squidward’s Suicide.” A creepypasta (a play on “copypasta”) is a horror-related image or story that gets copied and pasted around the internet. “Squidward’s […] Hurricane Dorian is currently brewing over the Atlantic Ocean before it is forecast to approach Florida, Georgia, and South Carolina as a Category 4 storm on Monday. Gov. Ron DeSantis declared a state of emergency across Florida and residents have scrambled to stockpile supplies ahead of the storm’s arrival. Despite […]