The MCU features some of the best cinematic battles out there, from epic clashes between armies to one-on-one duels, to fighting friends turned foes. 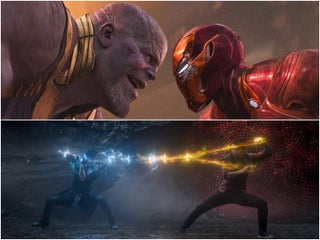 This year’s new ‘Call of Duty’ game was just revealed, and it arrives in October — here’s our first look at what to expect

A new ‘Avengers: Endgame’ poster appears to confirm that a beloved character didn’t survive Thanos’ snap, and fans are devastated

Marvel just released 32 new character posters for “Avengers: Endgame.” Characters that survived Thanos’ snap at the end of “Infinity War” appear in colour, while those that disintegrated are in black and white. Shuri, a fan-favourite from “Black Panther” was one of the few characters whose fate was left unclear, […]

What the ‘Spider-Man: Far From Home’ trailer really means

Tom Holland returns in a fresh trailer for “Spider-Man: Far From Home” – although, it may leave you with more questions than answers.

We made a timeline showing the entire history of the Marvel Cinematic Universe leading up to ‘Avengers: Endgame’

Before you see “Avengers: Endgame,” here’s a refresher on the entire history of the Marvel Cinematic Universe. Our comprehensive timeline includes events both on and off screen, from the birth of the Infinity Stones to the Thanos snap. Visit BusinessInsider.com for more stories. It all started with 2008’s “Iron Man,” […] Josh Brolin, who plays the villain Thanos in ‘Infinity War,’ hasn’t seen the movie yet — but he loved working on it Marvel Cinematic Universe movies have been on a serious hot streak, and it didn’t happen by accident

It all started at the very beginning, really. Marvel Studios hired the most unlikely actor to play a superhero who wasn’t very popular with the masses: Iron Man. Director Jon Favreau, originally seeking an unknown actor to play Tony Stark, cast Robert Downey Jr. in the role, with some major […] The Marvel Cinematic Universe may have aliens, stones that control space and time, and a giant angry green man. And while all that seems unrealistic, some of the fundamental ideas presented in “Avengers: Infinity War,” and other Marvel films, is based on real science. Here to explain more about one […] WARNING: This post contains major spoilers for “Avengers: Infinity War.” Read at your own risk. At this point, the Marvel Cinematic Universe has lots of characters. Some, like Thanos, might even say too many. Many of its heroes are similar: men who are full of themselves, get superpowers (or great […] “Avengers: Infinity War” screenwriters Christopher Markus and Stephen McFeely say the deaths that happened in the movie are “real.” They also explained why some of the characters – like Captain America and Black Widow – didn’t have a big part in this story. Warning: Major spoilers below if you haven’t […] The ‘Avengers: Infinity War’ characters who were the smartest, luckiest, and most useless DEAD OR ALIVE: All the ‘Infinity War’ characters whose fates are up in the air The 8 Marvel movies you should watch before ‘Infinity War’

Not planning a two-day Marvel Cinematic Universe marathon right before seeing “Avengers: Infinity War?” Nobody has time for that. To accommodate fans who want to freshen up their knowledge, we collected a list of the most essential MCU movies to watch right before you see “Infinity War,” which is scheduled […] ‘Avengers: Infinity War’ is worth the 10-year wait and will rip your heart out

“Avengers: Infinity War” is incredible, and joins “Black Panther” and “Thor: Ragnarok” as the best movies in the Marvel Cinematic Universe. Thanos is a terrifying and excellently written villain, played magnificently by Josh Brolin. The movie has some fun in the unconventional pairings of the heroes we love, but it’s […] Other than the possible demise of characters like Iron Man, Thor, Loki, and Captain America, we’re very excited for “Avengers: Infinity War.” This movie is what all of the installments in the MCU have been leading up to, so it’s hard to wait, and we can’t help but speculate. From […] People are having lots of fun coming up with examples of more ‘ambitious’ crossover events than Marvel’s ‘Avengers: Infinity War’

Twitter users are poking fun at an assertion that Marvel’s “Avengers: Infinity War” is “the most ambitious crossover event in history.” People from CNN anchor Jake Tapper to actor Zach Braff have joined in on the fun. The results are clever and hilarious, ranging from Power Rangers/Teenage Mutant Ninja Turtles […]