In-flight internet provider Gogo is considering selling its commercial aviation business. The company’s CEO, Oakleigh Thorne, said Monday during a conference call with investors that Gogo has had “extensive discussions with multiple parties” and that he’s “optimistic that a deal may happen,” according to The Verge. Gogo works with some […] 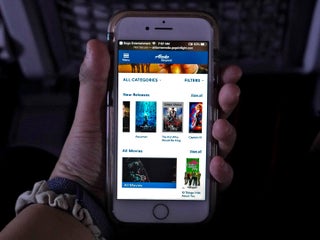 The best and worst US airlines to fly for in-flight entertainment, ranked

In-flight entertainment is a growing trend among US airlines, with most carriers offering some sort of means of accessing movies, television shows, music, or in-flight WiFi. CableTV.com analysts ranked the top ten airlines in the US based on the entertainment options they offer including seatback screens, streaming content, and in-flight […] Delta CEO Ed Bastian said on Wednesday that the airline was getting closer to being able to offer free Wi-Fi on every flight. Bastian, speaking at Skift Forum, said the challenge was figuring out how to handle the higher capacity that would come with making Wi-Fi free, while ensuring that […] We took a quick flight today from Sydney to Queensland’s Sunshine Coast, then back again to test out Virgin Australia’s new inflight wi-fi service provided by Gogo and Optus. The service is part of a free three month testing period that begun last Thursday, and is on one of the […]

It’s been delayed by a couple of weeks, but Qantas has finally won the race to be the first domestic carrier with inflight wi-fi, beating rival Virgin Australia by switching it on today Alas it’s only one plane in the fleet so far – a Boeing 737-800 (keep an eye […]

Virgin Australia is kicking off inflight wi-fi trials in April

Virgin Australia is trying to get the jump on Qantas in the race to bring wi-fi to the skies, announcing a partnership with Gogo and Optus for a three-month inflight trial starting next month. While Virgin has been surveying customers trying to gauge whether they’re willing to pay for in-flight […]

Virgin Australia appears to be weighing up how much damage the rollout of free wi-fi on Qantas domestic flights will cause as the battle for market share between the country’s main airlines moves to the internet. Virgin has begun surveying customers on their attitudes towards internet access on flights, looking […]

Australian airline Qantas has not been shy about spruiking its new high-speed wi-fi system that will be free for all passengers to enjoy video streaming while they fly. But its plans have hit a snag, with this week’s rollout postponed at the last minute. Qantas was due to host a […]

Qantas has revealed that a charter flight from Sydney to Brisbane was used to load test its new free high-speed wi-fi system. As part of the test phase of its new passenger internet service, the airline packed the flight with 140 employees to connect 200 devices to the network at […]

Qantas says free inflight wi-fi is on track for 2017

Qantas says it’s installed the first lot of wi-fi hardware on a trial Boeing 737-800 as the airline prepares to introduce free internet on flights from next year. It took 10 engineers in Brisbane a total of 900 man hours to install the satellite antenna on top of the aircraft, […]