Shelling from territory controlled by the Syrian government struck a market in opposition-held Idlib, killing the children and their teacher. 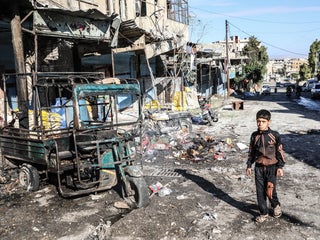 Turkey appears to be relaxing its efforts to prevent Syrian refugees from leaving for Europe via land and sea crossings with Bulgaria and Greece. “We have decided, effectively immediately, not to stop Syrian refugees from reaching Europe by land or sea,” an anonymous Turkish official told Reuters. Turkish news channels […] 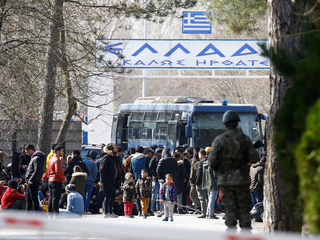 Turkey is now basically at war with Syria, thanks to Russian bombing that is driving 1 million refugees toward Europe

The Turkish armed forces are losing a battle with Russian-backed Syrian troops over a safe zone full of refugees in northern Syria. If Syria takes Idlib permanently, about 1 million refugees will be forced out in the direction of Turkey. Turkey has already taken in as many as 4 million […] 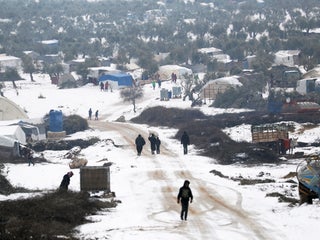 White House National Security Adviser John Bolton warned Syria on Monday that any use of chemical weapons against the Syrian people will result in a “much stronger response” than those following two previous incidents. The warning comes as Syrian, Russian, and pro-regime forces surround Idlib, the last rebel stronghold and […]

The White House warned Russia, Iran and the Syrian regime on Tuesday that the US would retaliate if either the regime used chemical weapons in a new offensive. Since at least 2013, the Assad regime has been repeatedly accused of using chemical weapons in multiple Syrian provinces, with the most […] The Syrian regime is preparing to assault the last rebel stronghold of Idlib, although the attack is not yet certain. The Russian Defence Ministry in at least the last week has pushed a narrative about possible upcoming staged chemical attacks in Idlib. And it’s a sign that the Syrian regime […] The Russian Su-25 pilot who was shot down over Syria on Saturday reportedly blew himself up with a grenade to avoid being captured by rebels. A video of the alleged incident later emerged on social media. Russia and the Syrian regime have responded to the Su-25 downing with massive airstrikes […] A Russian Su-25 was reportedly shot down in Syria on Saturday, and the pilot may have been killed by Syrian rebels. Russia has increased bombing runs in Idlib in the last month, which has resulted in more than one hundred civilian deaths and displaced more than 100,000 people. Syrian rebels […] A new offensive by the Syrian regime and Russia in Eastern Ghouta, Syria has killed at least 177 civilians in the last two weeks. Reports have also emerged that Syria struck an area between Harasta and Douma on Saturday with three missiles filled with chlorine gas. The new deadly offensive […]