Dr. Mahendra Amin, a OB-GYN in rural south Georgia, has been accused of performing procedures on women at an ICE detention centre who didn’t fully understand what was happening. A whistleblower complaint filed by Project South and a nurse at the facility generated national outrage over the allegations of a […] 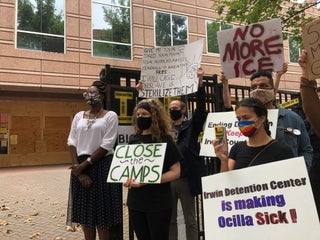 Women at an ICE facility in Georgia accused a doctor of performing unwanted hysterectomies on them. Lawyers say the problems run even deeper.

A whistleblower complaint released this week accused Georgia OB-GYN Mahendra Amin of performing unwanted hysterectomies on immigrant women held at the Irwin County Detention Centre in Georgia. Dr. Amin’s attorney told Insider that his client denied any wrongdoing alleged in the complaint and was confident his name would be cleared […]

Francisco Erwin Galicia, 18, a US citizen, was falsely detained after Customs and Border Protection officers didn’t believe his Texas state legal documents were real. He was released on Tuesday after a total of 23 days in detention in CBP and Immigration and Customs Enforcement facilities. He described “inhumane” conditions […] President Donald Trump’s pick to lead the Immigration and Customs Enforcement agency once said he could tell by looking in migrant children’s eyes that they would be a “soon-to-be MS-13 gang member.” Morgan made the comments in a January Fox News interview, and has made roughly 80 appearances on the […] Immigration and Customs Enforcement (ICE) officers arrested nearly 300 migrants at a mobile phone repair company in Texas on Wednesday in the agency’s largest workplace raid in more than a decade. The Trump administration has ramped up the pace and scale of major workplace raids, netting hundreds of immigrants across […]

The Immigration and Customs Enforcement agency told INSIDER that 18 infants under the age of 1 are currently being held in two family detention centres in Texas. The news comes shortly after immigration groups released a letter expressing “grave concerns” about the infants held in the Dilley facility, one of […]

Immigration and Customs Enforcement (ICE) officers reportedly set up a fake university in Michigan to crack down on immigration fraud. Emails from the school show how the university portrayed itself as a “nationally accredited business and STEM (science, technology, engineering, and mathematics) institution” to prospective students. ICE’s fake university reportedly […]

A former director of the Immigration and Customs Enforcement agency told Yahoo News that President Donald Trump’s border wall won’t stop the “true threats.” She said the wall might be effective in keeping out a young migrant child, but it won’t do much to stop cartels that use submarines to […]

A perfectly symmetrical circle of ice has formed in the Presumpscot River in Westbrook, Maine. City officials say the 100-yard-wide ice floe was formed by a circular current in the river, which has been causing the ice sheet to continue rotating counter-clockwise. The rare site has become somewhat of a […]

ICE wrongly flagged an American citizen to be deported, so a Florida sheriff’s department detained him for weeks. Now he’s suing.

An American man was wrongly flagged for deportation by the Immigration and Customs Enforcement agency – and a local sheriff’s department held him for weeks because of it. Peter Brown is suing the Monroe County Sheriff’s Office in Florida over the detention, accusing the department of violating his constitutional rights. […]