A former Marine arrested for his role in the Capitol riot had previously been hailed a hero and had appeared on Ellen. A video of him saving six dogs after Hurricane Florence went viral in 2018. Ryan Nichols, 30, from Longview, Texas, was arrested on January 18 on seven charges. […] 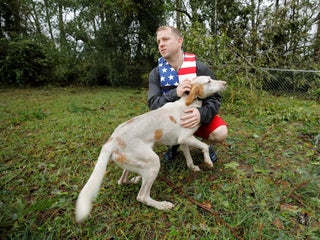 Charges have been dismissed against the woman who took in animals during Hurricane Florence, the Wayne County Government said in a press release on Tuesday. Tammie Hedges had been charged with 12 counts of misdemeanour practice and attempted veterinary medicine without a licence, including allegedly administering antibiotics. The animals’ health […]

If you’re considering adopting an animal that was displaced by Hurricane Florence, experts say there are several things you should keep in mind. INSIDER spoke to the CEO of Hurricane Pets Rescue and the vice president of the ASPCA Anti-Cruelty Behaviour Team to gain insight. Experts recommend going through proper […]

As Hurricane Florence’s floodwaters recede, some North Carolina rivers could rise another foot, and the full moon isn’t helping

Hurricane Florence floodwaters may be receding, but it’s still causing rivers to rise in some areas of southeastern North Carolina. The Cape Fear River is expected to reach record levels on Monday – and may get even higher on Monday night, thanks to the full moon. The Black, Lumber, Neuse, […]

Hurricane Florence was the worst flooding event in East Coast history, according to some reports. The storm churned into North Carolina on September 14, bringing storm surge, flooding, and intense rainfall. More than 33 inches of rain fell in parts of the state. Thousands of people evacuated their homes, at […] When Hurricane Florence hit, Nancy Shipley and Ian Beaumont rushed to North Carolina to help with rescue efforts and disaster recovery. The husband and wife run an adventure travel company called What’s Next Adventures. But their skill set has proven useful in hurricane situations. Shipley and Beaumont told Business Insider […] When President Donald Trump arrived in North Carolina on Wednesday to survey the damage from Hurricane Florence, he seemed to be particularly interested in the conditions near one of his golf courses. During a briefing on damage from the storm, Trump asked a local official how conditions were at Lake […] JACKSONVILLE, North Carolina – Camp Lejeune faced criticism from some journalists for not ordering a mandatory evacuation before Hurricane Florence. But what then looked like a Category 4 hurricane later became a tropical storm, and US Marines at Camp Lejeune ended up assisting with search and rescue missions around the […] Adam Johnson, a victim of Hurricane Florence, described a tree smashing into his home and killing both his wife and son. Lesha Murphy-Johnson and their eight-month-old son died in the impact last Friday in Wilmington, North Carolina. Johnson has described the event in an interview with The Daily Beast. He […] A North Carolina Chick-fil-A broke from tradition and opened on Sunday, as the state was battered by Hurricane Florence. The location’s franchisees and employees worked on Sunday to prepare hundreds of chicken sandwiches and nuggets for people who were forced to evacuate their homes because of the storm. Typically, Chick-fil-A […] Hurricane Florence ripped through North and South Carolina over the weekend, creating catastrophic flooding and record-setting rainfall. The storm left at least 17 people dead, and has knocked out power for over 1 million residents in the region. Flash flood warnings are in effect in across large portions of southern […] Wilmington, North Carolina, has been cut off from the rest of the state thanks to Hurricane Florence’s floodwaters, which are still rising. Officials are looking to fly goods into the city, and police have been standing guard outside of at least one store that is still open. Police received more […] Companies are being accused of price gouging on food, water, and gas during Hurricane Florence ‘We just don’t want people to think this is over’: Florence continues ravaging the Carolinas as the death toll climbs, rivers overflow, and tornadoes threaten to strike

Hurricane Florence is tearing through the Carolinas with disastrous flooding and record-setting rainfall. “We just don’t want people to think this is over because it’s not. It’s not anywhere,” North Carolina governor Roy Cooper said on Saturday. The storm has killed a reported 17 people so far, and officials expect […] Residents were rescued from the coastal town of New Bern, North Carolina after massive flooding and damage from Hurricane Florence stranded hundreds. NBC News reported 455 people were rescued by the operation. Officials said operations were functional because the storm had weakened, but warned rising flood waters meant the threat […] US President Donald Trump has reportedly been fixated on unflattering news reports about his response to Hurricane Maria, which slammed Puerto Rico in September 2017. Trump has particularly been irritated by video footage of him throwing rolls of paper towels to a crowd of relief workers on the island, according […] ‘We’re not crazy’: A NOAA hurricane hunter reveals what it’s like to fly into a big storm like Hurricane Michael

Hurricane hunters have been flying into storms for 75 years to measure wind speeds and pressure. That’s the best way to get a clear, accurate picture of how strong and windy a hurricane is. Hurricane scientist Jon Zawislak, who flew through Hurricane Florence, told us what the bumpy ride inside […] As Hurricane Florence makes it way across the Carolinas, millions of coastal residents have reason to be concerned about the structural integrity of their homes. Already, nearly 300,000 homes and businesses have lost power, and officials are reporting damage to property in Onslow County, North Carolina. When Hurricane Harvey swept […]