I watched Egypt’s bloody struggle for democracy that began in Tahrir Square 10 years ago today. Here’s my diary of 18 days that shook the world.

10 years ago, I was in Cairo when the revolution broke out. Over 18 days, Egyptians protested and brought down President Hosni Mubarak. This is my diary of what I saw and did over 18 days that were by turns violent and euphoric. Visit Business Insider’s homepage for more stories. […] 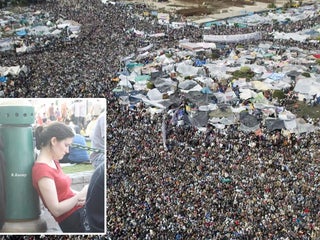 This map shows how terrorism is on the rise in Egypt

February 11th marked the 4th anniversary of the... An Egyptian court on Saturday dropped its case... Hosni Mubarak Has Been Released From Prison

He was helicoptered to a military hospital. Egypt Is Falling Apart On The Anniversary Of The Revolution [PHOTOS]

It’s been a tumultuous two years since Egypt became a democracy, and tens of thousands of citizens are recognising its anniversary by gathering to protest against President Mohamed Morsi. In Egypt, It’s Beginning To Look Like 2011 All Over Again

[credit provider=”Twitter/@Almayadeennews” url=”https://twitter.com/Almayadeennews/status/273495471220207617″] CAIRO, Egypt — Tens of thousands of Egyptians poured into Cairo’s Tahrir Square Friday in the latest protests against newly-elected Muslim Brotherhood President Mohamed Morsi.At one of the largest protests yet against Morsi’s five-month rule, demonstrators in the iconic plaza waved anti-Brotherhood signs and chanted against the leader, who […] HUGE: Hosni Mubarak Is About To Deliver An “Important Speech” [credit provider=”AP Images”] HAMZA HENDAWI REPORTING FROM CAIRO (AP) — Hosni Mubarak was sentenced to life in prison Saturday for failing to stop the killing of protesters during the uprising that forced him from power last year. The ousted president and his sons were acquitted, however, of corruption charges in a […] [credit provider=”Justimage” url=”http://www.yfrog.com/froggy.php?username=justimage”] The Egyptian presidential campaigns, the first since the departure of Hosni Mubarak, have seen enough twists and turns to fill a book. 20-two people have submitted nominations so far, AFP reports, six of which were submitted just before the deadline. What’s more, some of them may not […] [credit provider=”AP Images” url=”http://www.apimages.com/secured_user/Download.aspx?st=dl&attemptedDL=1&errors=&impid=&hash=LnP8hAgp8jlXV1pWg9hed9L%252bsxwFJb8FohdJoDJ07RyJ%252fQQlHx01BJa4UUZqxrUpoLEERSsIVzy%252bxfNe64XK7g%253d%253d”] CAIRO (AP) — Egypt’s benchmark stock index has fallen by almost 4.6 per cent within minutes of the start of trade as deadly soccer riots the night before left 74 dead and rekindled fears of fresh instability, a year after the ouster of Hosni Mubarak.The benchmark […] Millions Of Mini-Mubaraks: The Tyrants Of Family Business

[credit provider=”AP”] There are millions of Hosni Mubaraks.Most lead family businesses, not nations.

In Desperate Plea For Freedom, Mubarak Will apologise, And Turn Over A Bunch Of Cash

[credit provider=”AP”] After being overthrown three months ago, former Egyptian president Hosni Mubarak will apologise and ask for amnesty, from the country he ruled for almost 30 years.Mubarak is said to be drafting a letter to broadcast on Arabic and Egyptian channels apologizing for the offenses caused by he and […]

Yesterday it was reported that Hosni Mubarak had a heart attack before he was scheduled to be questioned by prosecutors investigating the many allegations against him.

THE LATEST: The Egyptian army has denied this has happened, according to Al Jazeera.

Former Egyptian President Hosni Mubarak and his son Gamal Mubarak may have been behind the 2005 terrorist attacks in Sharm el-Sheikh that killed around 80 people, according to documents acquired by Der Spiegel.

The photo below shows that the pinstripes on Hosni Mubarak‘s suit are actually his own name repeated over and over. That’s… interesting. [preserve] [/preserve] Hosni Mubarak is said to have collapsed soon after his last public address on Thursday. By Saturday night he was in a full coma, according to al-Masry al-Youm.

SNL Gives Hosni Mubarak’s Side Of The Story: ‘I Was Trying The Old Jedi Mind Trick’ If it’s Friday, it’s time for your weekend reading memo from Business Insider Politics.  We’re heavy this week on Middle Eastern and Pakistan analysis, for obvious reasons.  Plus the white paper that changed how everyone thought about state and municipal debt.  Plus a 60-page book on evolution. *