A beloved filly with a name from a tongue twister scored her first victory on Monday, putting commentators on the spot as she raced to the front. 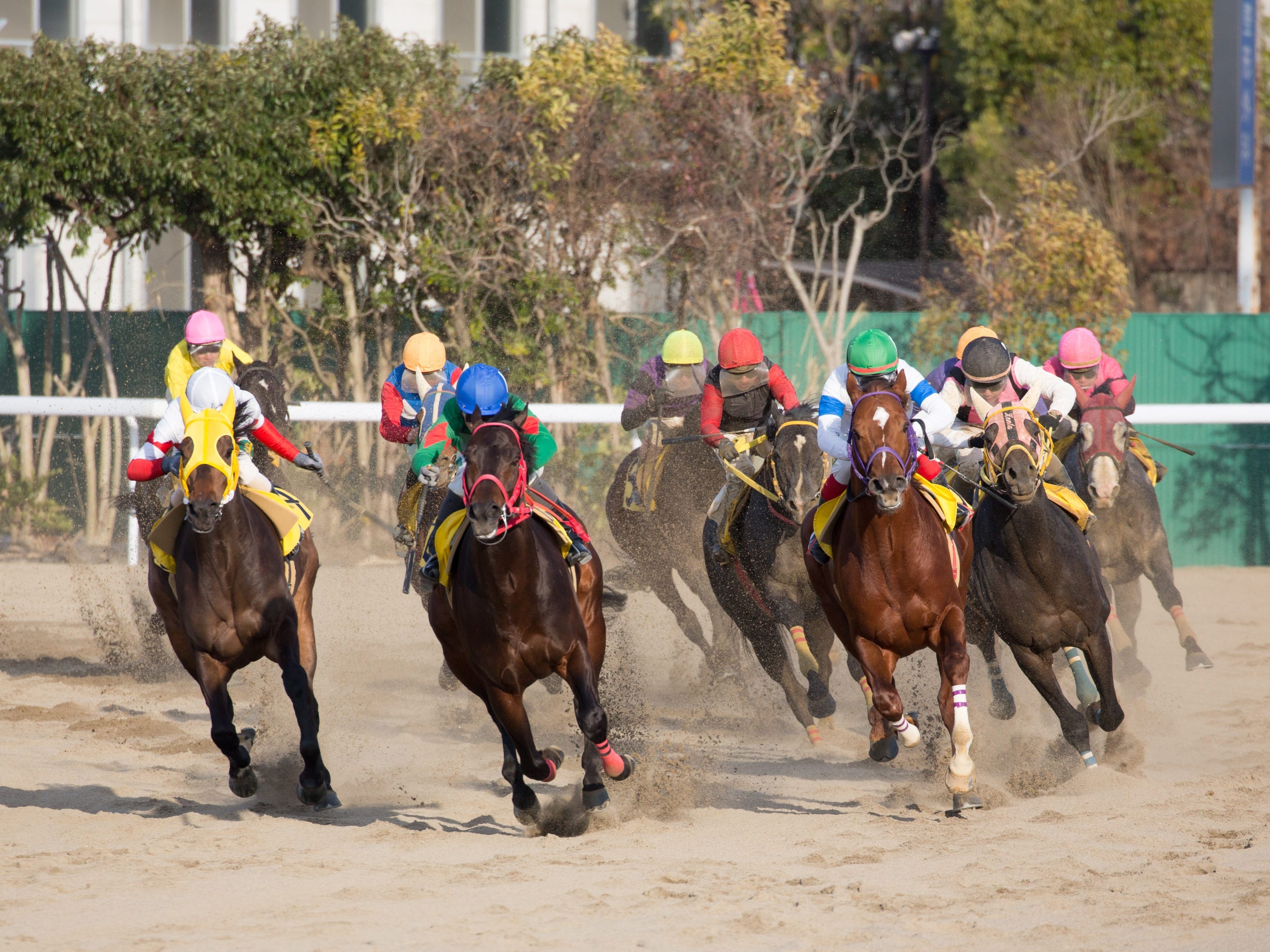 Bob Baffert was suspended by the New York Racing Association after Medina Spirit, the Kentucky Derby winner, tested positive for a banned drug. 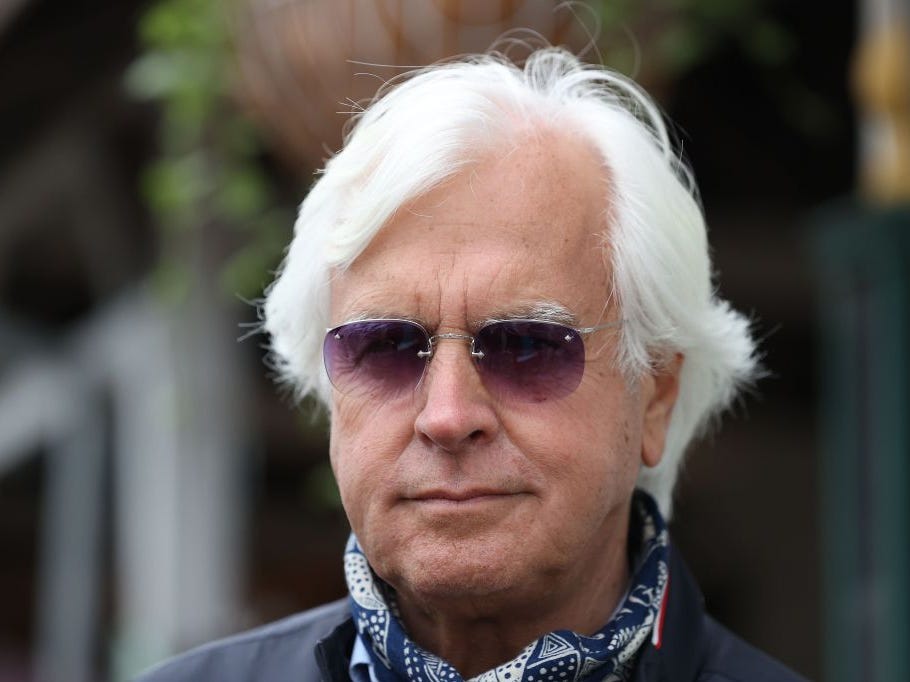 Kentucky Derby winner Medina Spirit will be allowed to compete in the Preakness Stakes with conditions including additional anti-doping testing. 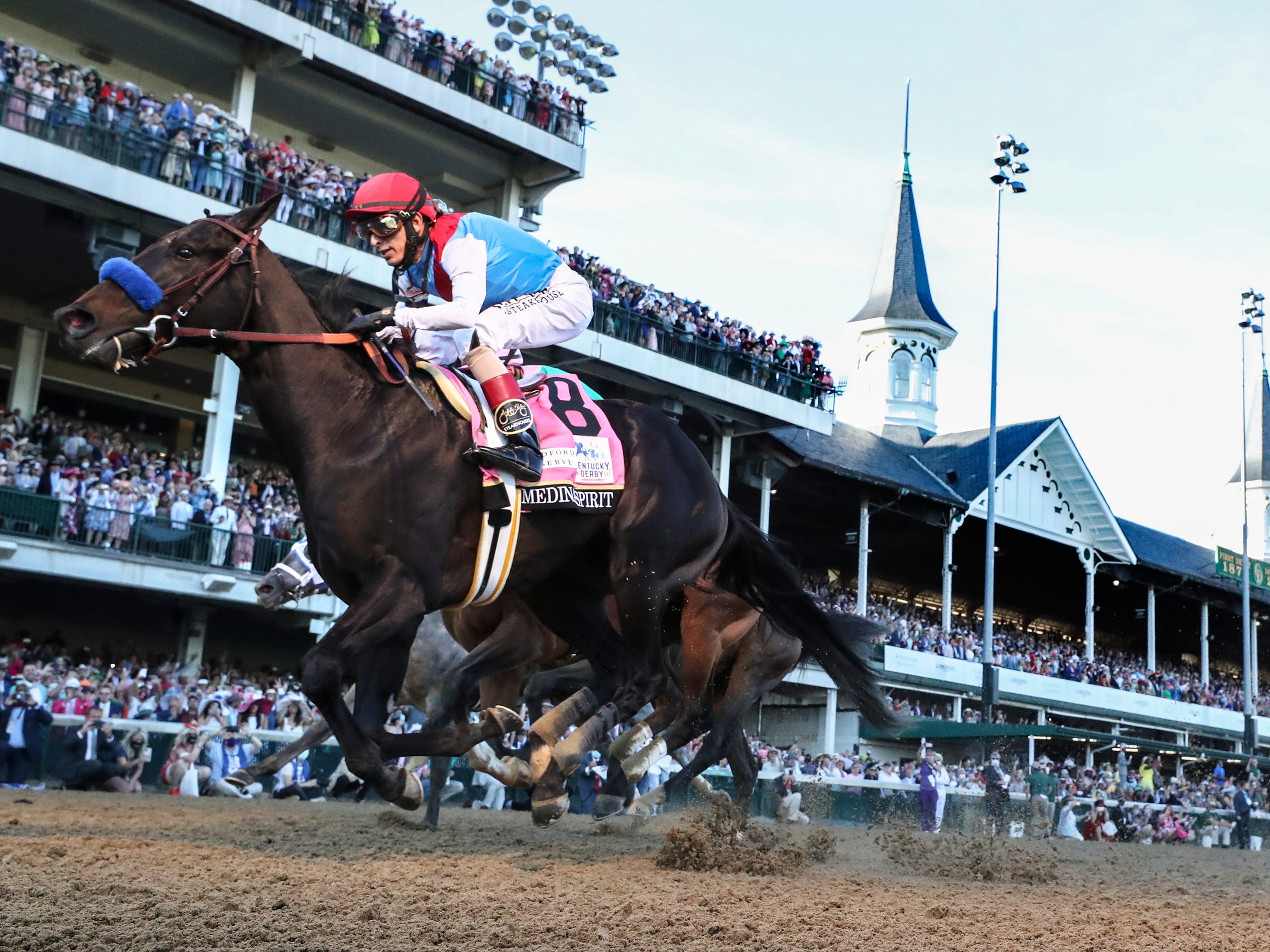 Trump calls Kentucky Derby winner a ‘junky,’ but its trainer says the horse is a victim of cancel culture

The horse that won the Kentucky Derby tested positive for a banned drug and the trainer is facing suspension. Donald Trump called the horse a "junky." 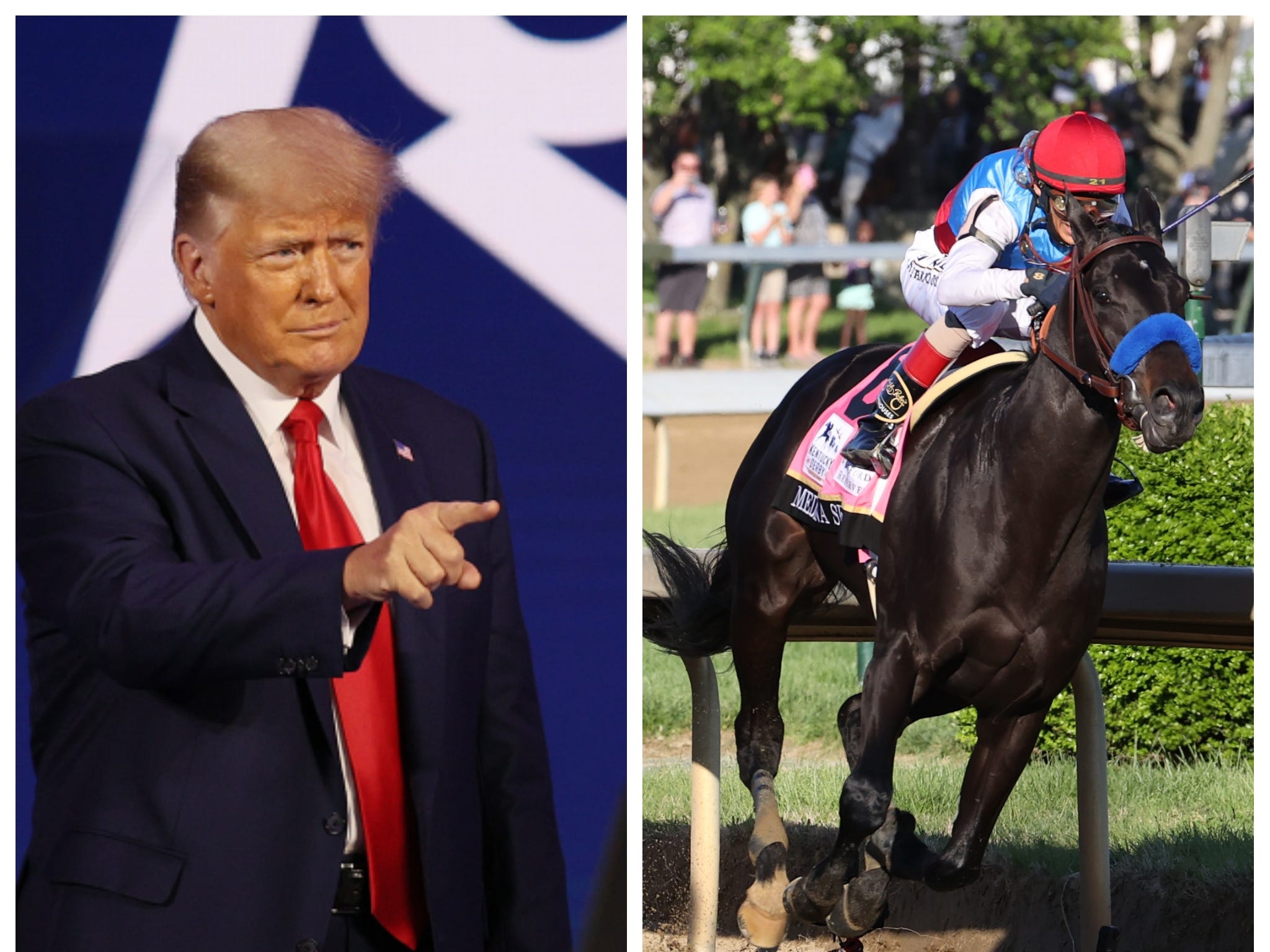 The horse that won the Kentucky Derby failed a postrace drug test, renewing questions about its trainer

Medina Spirit tested positive for double the limit of betamethasone. The result is the latest scandal around the Hall of Fame trainer Bob Baffert. 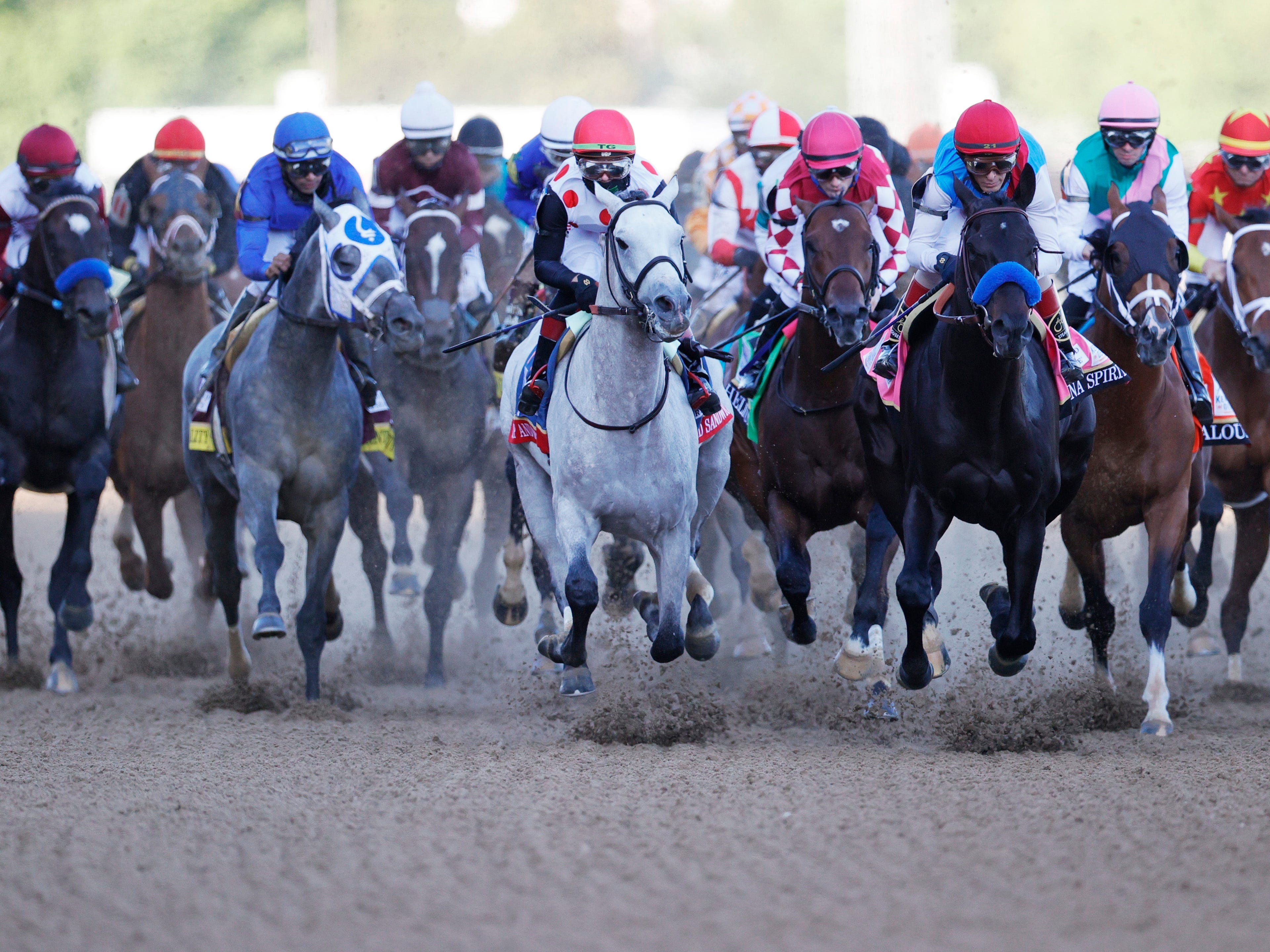 Kentucky Derby 2021: Everything you need to know about the 20 horses racing in the ‘Run for the Roses’

Essential Quality was the morning line favorite, but several other contenders are set to compete at the 2021 Kentucky Derby. 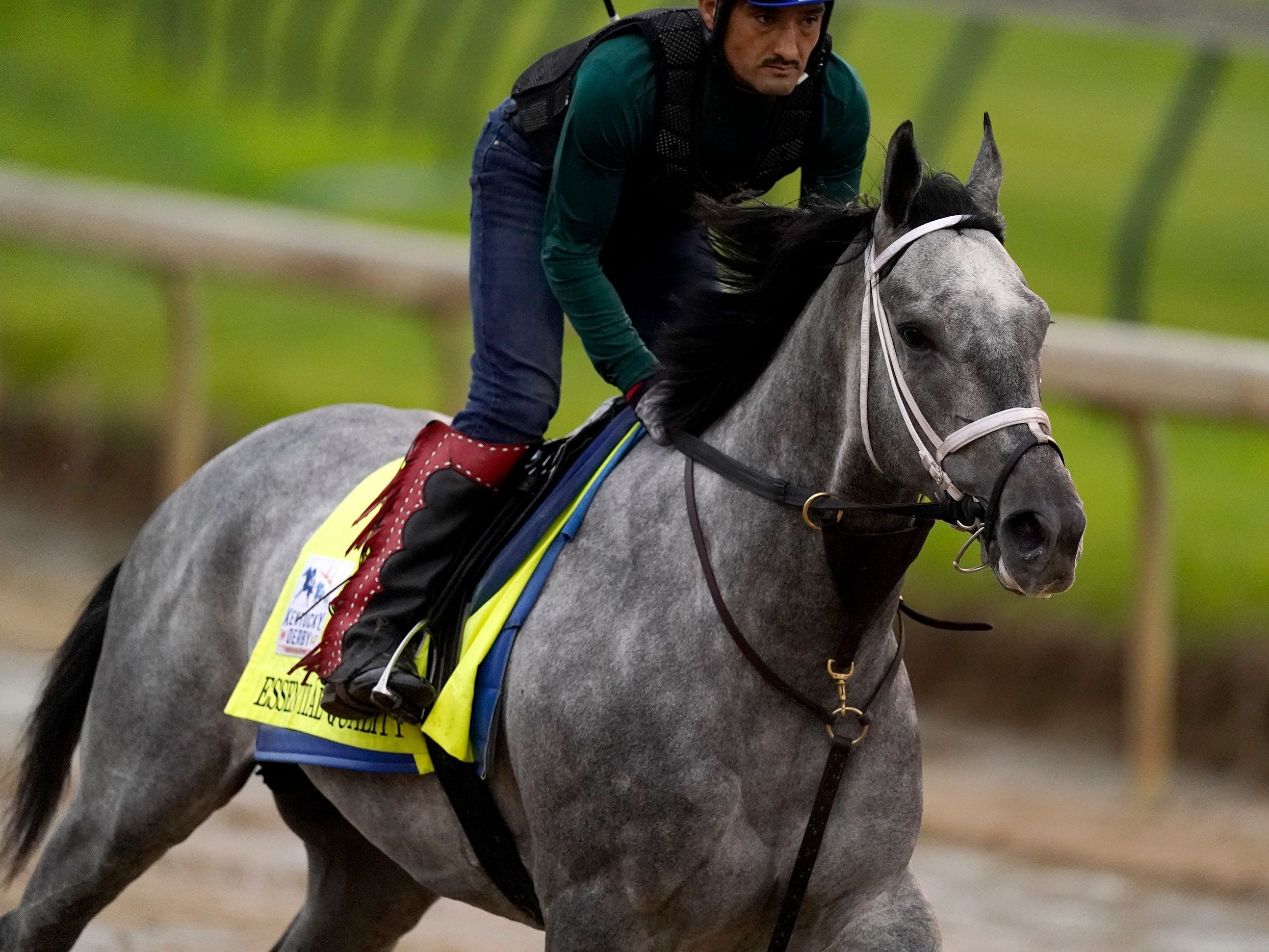 Photos show a surreal scene at the Kentucky Derby during the pandemic, with almost no fans in the stadium and protests demanding justice for Breonna Taylor

The iconic Churchill Downs Racetrack in Louisville, Kentucky, hosted the 146th Kentucky Derby on Saturday, September 5. This year’s race, which was postponed from the first weekend in May due to coronavirus concerns, was unlike any other. The Derby took place with fewer horses, less than half the typical wagering, […] 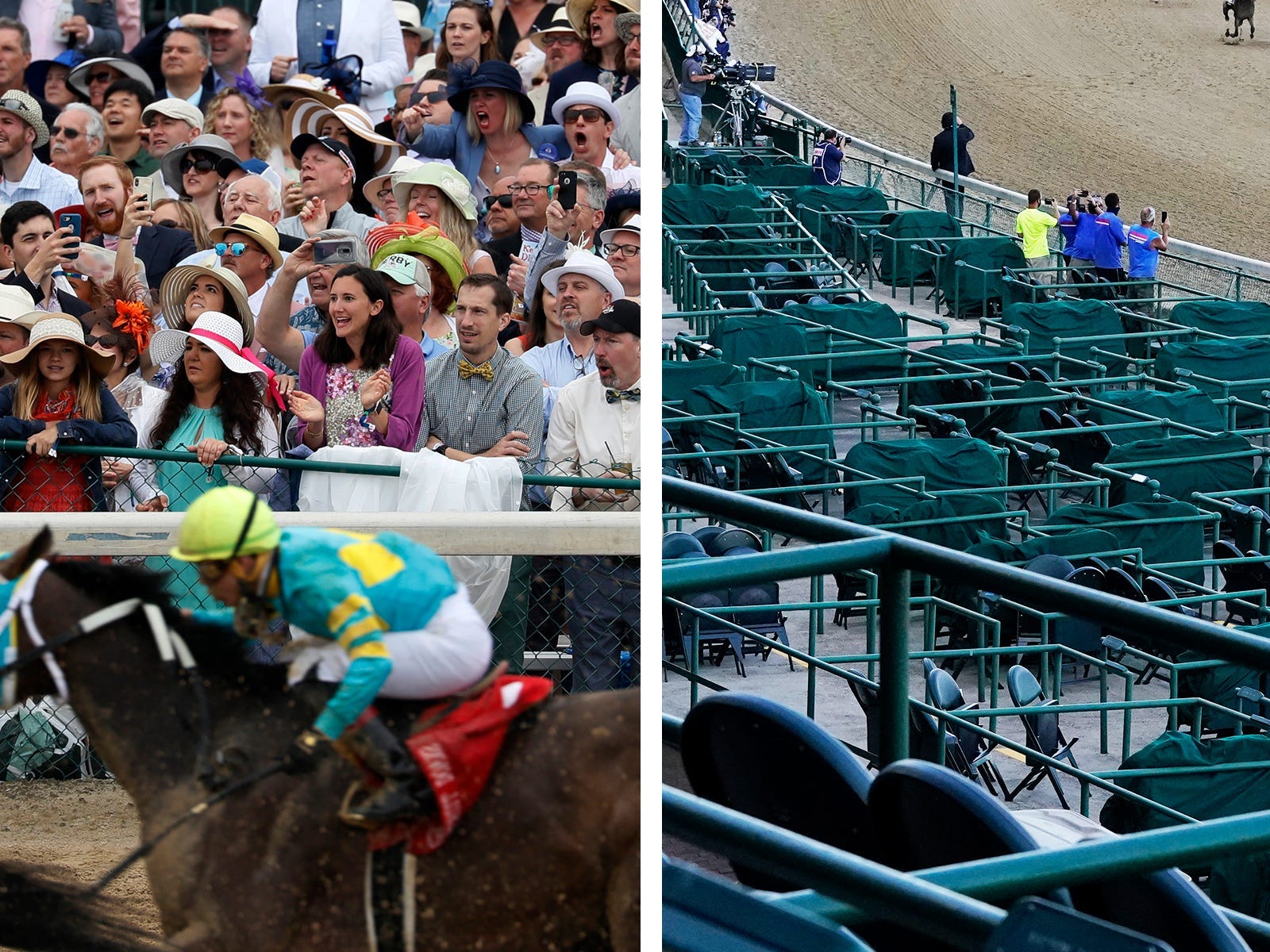 The 146th running of the Kentucky Derby takes place on Saturday after being delayed due to the coronavirus pandemic. It’s the first time since World War II that the Kentucky Derby has not taken place in the month of May. Only horse owners and family members of the jockeys can […] 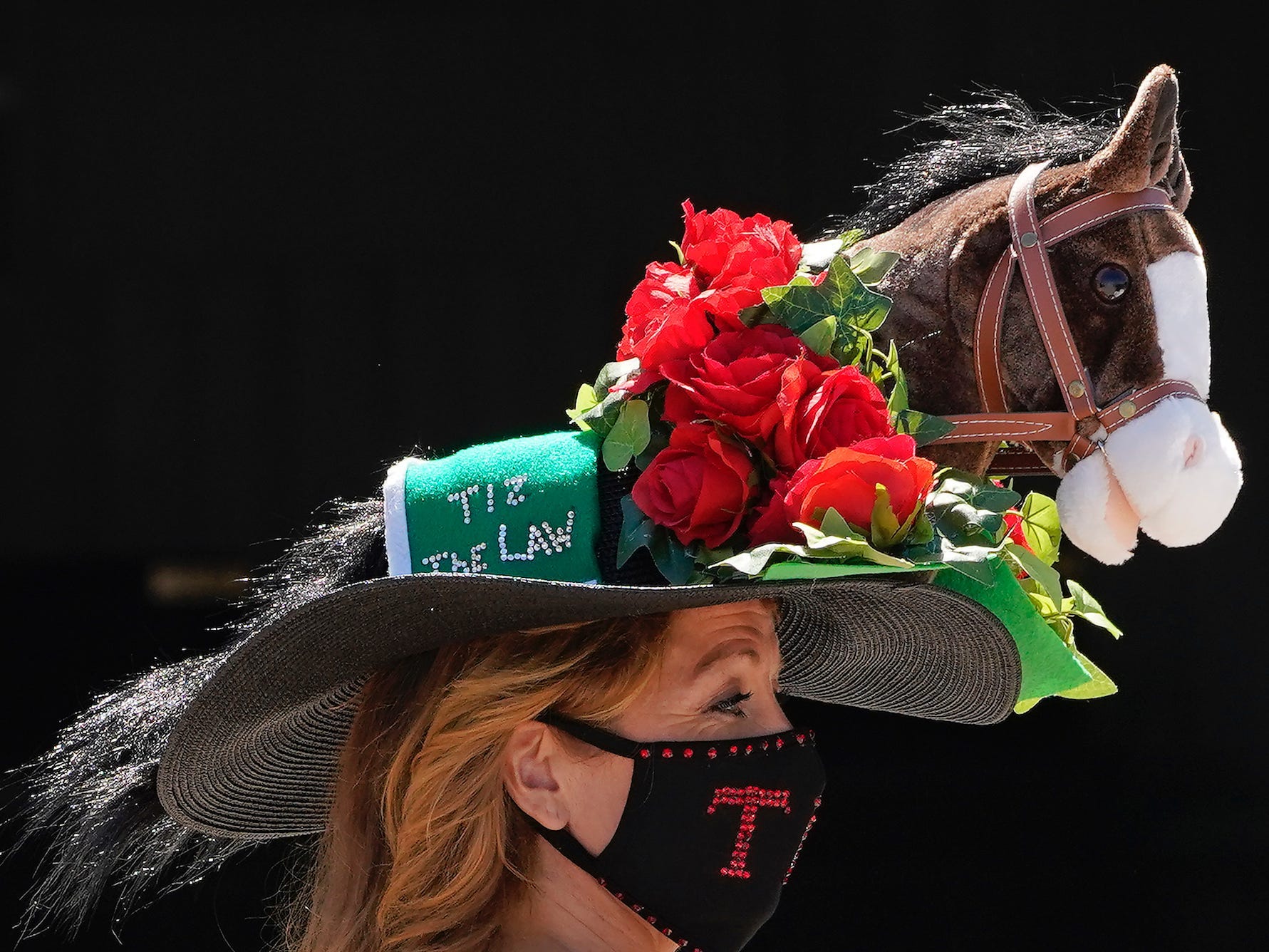 Belmont Stakes 2020: Post positions and odds for the first race of the Triple Crown 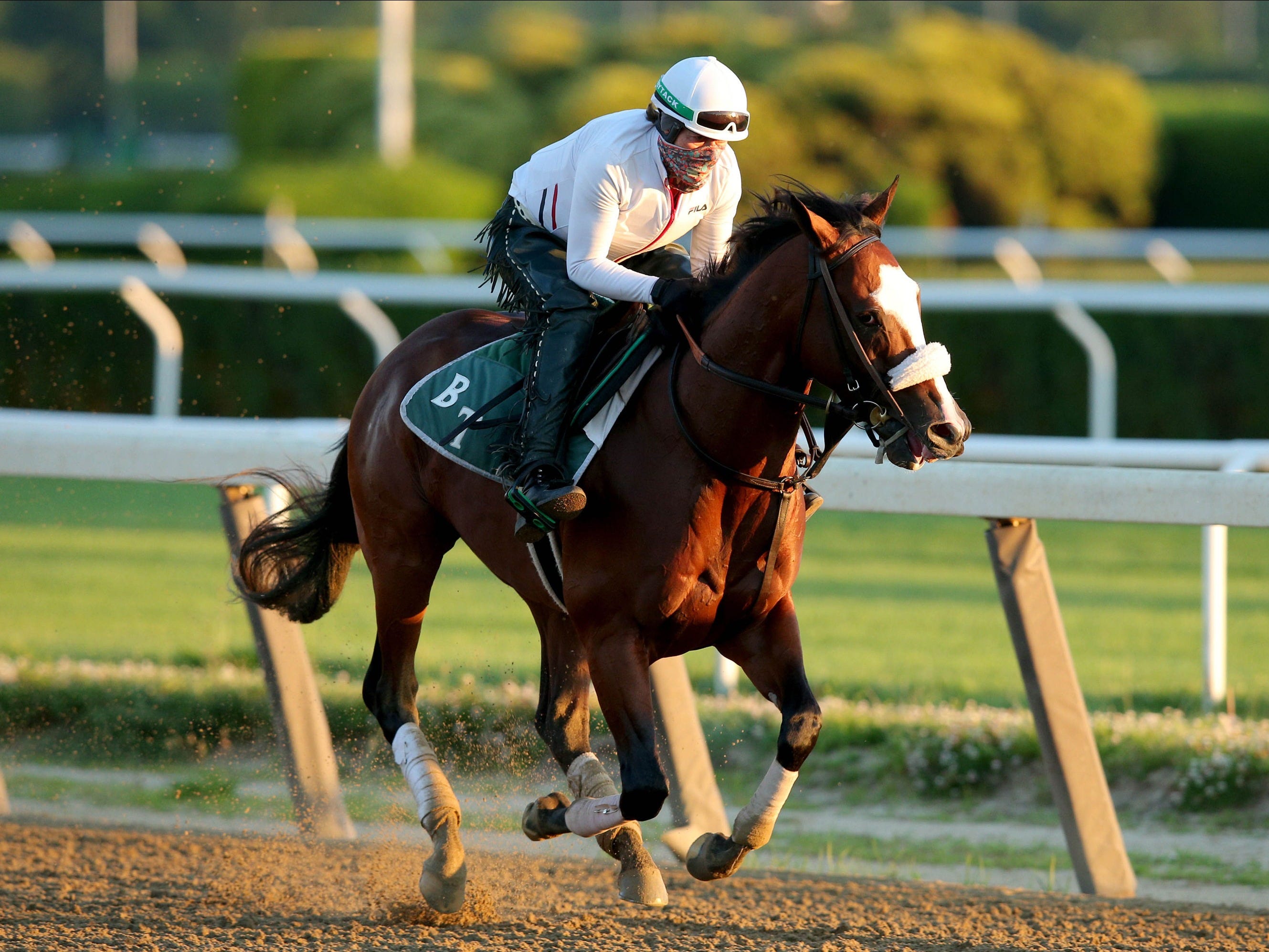 Sheikh Mohammed, the ruler of Dubai, is an avid horse-racing fan. He owns Godolphin, a worldwide thoroughbred breeding and racing operation that operates in Dubai, the US, the UK, Ireland, Australia, and Japan. At this year’s Keeneland yearling sale in September – the largest horse sale in the world – […]
Lifestyle Oct. 14, 2019, 12:07 AM

What it’s like going to the ‘Super Bowl of horse sales,’ where royals and millionaires bid on horses they hope might be the next Kentucky Derby winner

Keeneland is the world’s largest thoroughbred auction house. At the auction house’s September yearling sale in 2019, buyers including Sheikh Mohammed of Dubai and billionaire businessman Vinnie Viola dropped more than $US360 million on 2,855 1-year-old horses (called “yearlings”) in the hopes they will be the next great racehorses. The […] 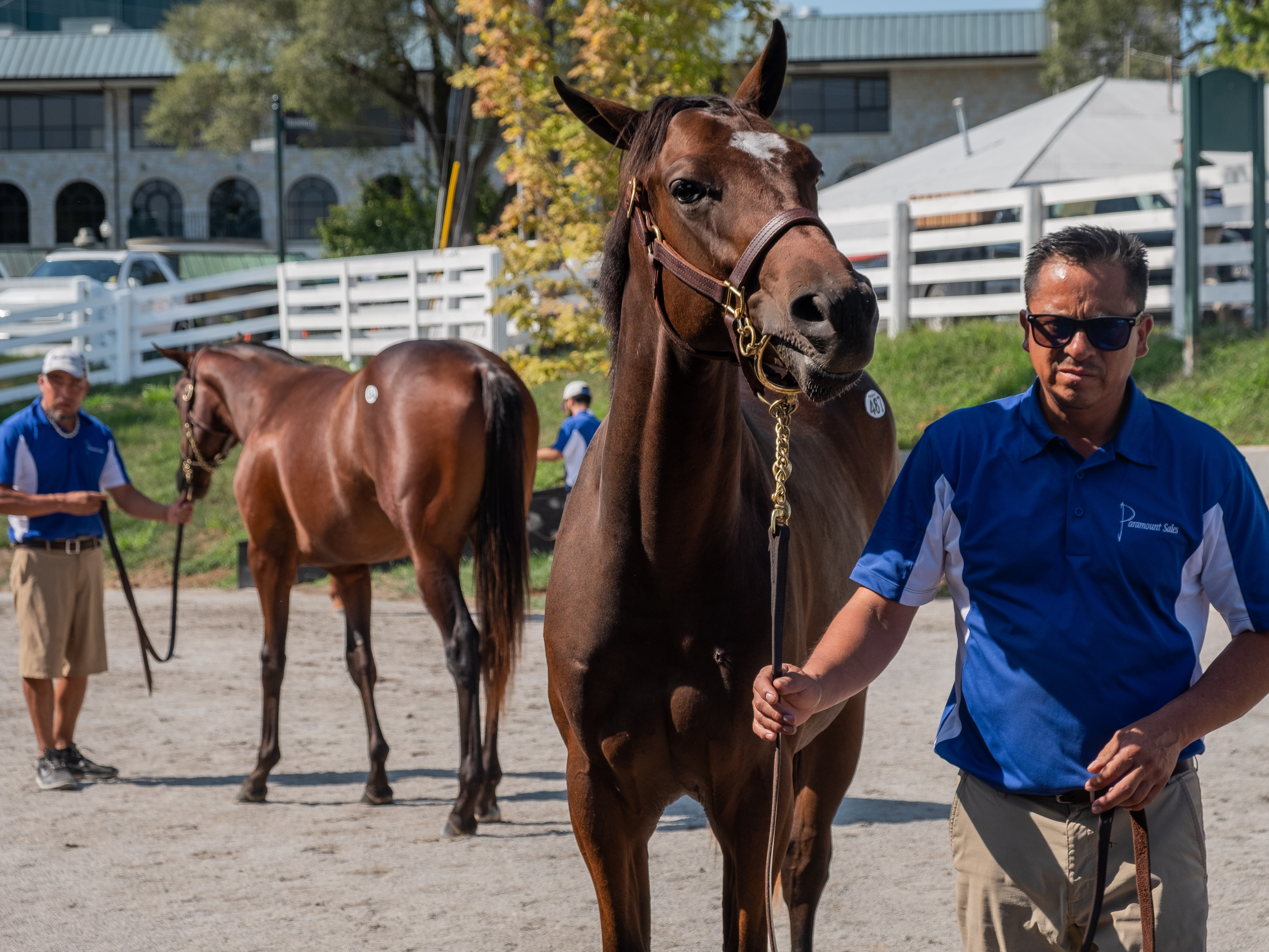 Bob Baffert is one of the world’s most successful and prominent horse trainers. The Hall of Fame trainer has coached five Kentucky Derby winners as well as two Triple Crown victors. At the world’s largest horse sale, which takes place every September in Lexington, Kentucky, Baffert told Business Insider that […]
Lifestyle Oct. 7, 2019, 12:07 AM

Lexington, Kentucky, is known as the “horse capital of the world.” The region is home to about 450 horse farms as well as Keeneland, the world’s largest thoroughbred auction house. One of the most prestigious farms in this area is Claiborne Farm, a 3,000-acre, 109-year-old farm that’s been visited by […]
Lifestyle Sep. 22, 2019, 11:32 PM

I spent 4 days in the ‘horse capital of the world,’ where the barns look more like estates and billionaires convene for the world’s largest horse sale. Here’s what life looks like in Kentucky’s second-biggest city.

Lexington, Kentucky, is known as the “horse capital of the world.” The region is home to about 450 horse farms as well as Keeneland, the world’s largest thoroughbred auction house. Lexington is also known for its bourbon and has its very own trendy “Distillery District.” The median listing price for […]
Lifestyle Sep. 18, 2019, 11:58 PM

Inside the glitzy kickoff party for the world’s biggest horse sale, where 300 of the industry’s elite sipped on rare bourbons ahead of dropping millions on horses

Keeneland’s annual September yearling sale in Lexington, Kentucky is the biggest horse sale in the world, with more than $US377 million worth of horses sold in 2018. I flew down to Lexington and attended the sale’s kickoff party at the Apiary, an 8,100-square-foot upscale events venue. About 300 of the […]
News Sep. 16, 2019, 7:15 AM

Vice President Mike Pence paid the first horse to win the Triple Crown in 37 years, American Pharoah, a visit at the farm in Versailles, Kentucky where the race horse now lives and is used for breeding. Things didn’t go according to plan for Pence, who told House Republicans at […] The New York Times reported Wednesday that the now-retired race horse Justify failed a drug test before the 2018 Kentucky Derby, the first of three races in the American Triple Crown. A failed drug test would usually result in disqualification and the forfeiture of any prize money. Instead, The Times […]
News May. 18, 2019, 5:56 AM

Preakness Stakes 2019: Everything you need to know about the 13 horses racing in the second leg of the Triple Crown

This Saturday, 13 horses will run in the Preakness Stakes, the second race of the Triple Crown. Post positions and the morning line were set on Wednesday, finalising the field for the “Run for the Black-Eyed Susans.” After the controversial finish to the Kentucky Derby, the field is wide open, […]
News May. 16, 2019, 7:33 AM

This Saturday, 13 horses will run in the Preakness Stakes, the second race of the Triple Crown. Post positions and the morning line were set on Wednesday, finalising the field for the “Run for the Black-Eyed Susans.” After the controversial finish to the Kentucky Derby, the field is wide open, […]
News May. 8, 2019, 6:19 AM

The controversial winner of the Kentucky Derby will not run in the Preakness, and it has major implications for the remaining Triple Crown races

Kentucky Derby winner Country House will not race in the Preakness Stakes in Baltimore. It’s the first time in more than 20 years that the Derby winner will not enter the second race of the Triple Crown. Country House’s absence from the race creates some odd repercussions, and potentially sets […]
Next Page »