Experts say that ‘murder hornets’ are not, in fact, invading the US

Following recent reports of Asian giant hornets – native to China, Korea, and Japan – being spotted in the US for the first time, people began to fear the possibility of an invasion of the nearly 2-inch-long hornet. Nicknamed the “murder hornet,” the Asian giant hornet can decapitate honeybees and […] 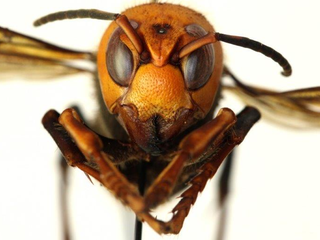 The US just banned 12 pesticides that are like nicotine for bees. Here’s how dangerous they are.

The US Environmental Protection Agency (EPA) recently banned 12 products containing neonicotinoid, a pesticide that functions similarly to nicotine. Neonicotinoids have been linked to impaired memory, movement, and death in bees, which are critical to the world’s crop production. Seven of the recently banned pesticides are used to protect crops […] I attended a breakfast with food that would disappear if honeybees went extinct. It was a disturbing glimpse at a future without avocados and coffee.

The rapid decline of honeybees poses a threat to our global food supply. As pollinators of about a third of the world’s crops, honeybees are essential to producing crops such as fruits, vegetables, and almonds. The microbiome company Seed has developed a probiotic that could make bees more resistant to […] A ‘bee highway’ is being created in Detroit, and it could help offset the dangerous decline of honeybees

The nonprofit Bees in the D is managing a network of beehives in Detroit to offset the decline of honeybees. Honeybee populations have declined dramatically for most of the past decade. The US Department of Agriculture estimates that honeybees pollinate about $US15 billion of crops each year. Bees in the […] New research shows that glyphosate, a main ingredient in the world’s most common weed-killer, can be harmful to honeybees. According to the study, worker bees exposed to glyphosate when they are young are more likely to die from exposure to bacteria later in life. The study adds to other scientists’ […] Dr. Gary Shilling, the president of A. Gary Shilling & Co., spoke to Business Insider CEO Henry Blodget about bees. Shilling is a recreational beekeeper and has an apiary in the back yard of his New Jersey home. Following is a transcript. HENRY BLODGET: You say that the Shilling Apiaries, […] As bee populations decline, Japanese researchers have designed a tiny drone to pick up the slack

A team of Japanese researchers have succeeded...