Sundar Pichai responded to an employee concern that management's answers to staff's questions have become more bureaucratic and less honest. 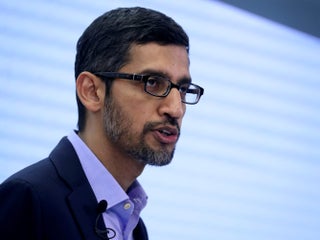 Judi Ketteler lives with her husband and two young children in Cincinnati, Ohio. Her work has appeared in The New York Times, The Washington Post, and TIME. The following is an adapted excerpt from her book, “WOULD I LIE TO YOU: The Amazing Power of Being Honest in a World […] Parents are often quick to praise their... 10 signs someone is lying to you

Chances are, you get lied to multiple times on... How to know if you’re being lied to This type of LinkedIn photo can make you look more trustworthy

The trick? Look a little happy. Words are powerful and should be chosen carefully. How Honest Should You Be In An Exit Interview? STARTUP CEO: The Secret To Success Is Never Telling A Lie

How many lies do you tell a day? Perhaps white... Here’s The Best Way To Answer ‘What’s Your Greatest Weakness?’

It’s a standard question in almost every job interview, and one that most people have a hard time answering truthfully: “What’s your greatest weakness?” Despite being straightforward, it’s a tricky question to answer. On the one hand, you don’t want to appear cocky by pretending you have no weaknesses (because […] Building trust doesn’t happen in a day, but rather over weeks, months, and years. Trustworthy leaders spend the better part of their careers establishing their reputation and character, writes Joel Peterson, chairman of JetBlue Airways, in a recent post on LinkedIn. Because of that, they treat integrity as a habit […] People Think These Jobs Have The Most Honest Employees

Americans consider nurses to be the most upstanding workers, according to new data from Gallup. The nation has been of that mindset for more than a decade. Nursing has topped Gallup’s annual list of professions with high honesty and ethical standards in every year since 1999. This year, 82% of […]