These are Insider's biggest healthcare stories for March 10. 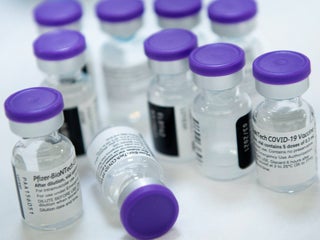 What’s in store for the next wave of vaccines

Hello, Happy Monday! We’re starting off the day with some fresh vaccine news. First, Merck is discontinuing its COVID-19 vaccine trials, a major setback from the company that developed the only Ebola vaccine. And Moderna said Monday that it’s developing a new version of its COVID-19 shot to fight the […]

Welcome to Dispensed Daily , your daily dose of healthcare news from Business Insider’s healthcare editor Lydia Ramsey Pflanzer and the healthcare team. Subscribe here to get this newsletter in your inbox every weekday. Hello, Here’s the healthcare news you need to know: Inside the rise of Dr. Lisa Fitzpatrick, […]

Jack Abraham, the 33-year-old founder and managing partner of the venture-capital firm Atomic and a cofounder of the health startup Hims, wrote a response to a Quora question about net worth, saying he’s a self-made entrepreneur who’s on track to become a billionaire “by my mid to late 30s.” The […] The CEO of Ro, a healthcare startup whose brands prescribe Viagra and other medications online and ship them to customers’ doors, just accused rival company Hims of ripping off part of its website. A new online doctor’s visit experience from Hims copies Ro “word for word,” Ro CEO Zachariah Reitano […] Dispensed: Pharma’s plan to go beyond drugs, erectile dysfunction medications for young men, and what privacy you have when you take a genetics test

Hello, The healthcare team is waiting in eager anticipation to see what drama unfolds next week at the Congressional hearing between drugmakers and lawmakers about drug prices. But in the meantime, it’s been fascinating to follow along with what the Food and Drug Administration’s been saying about all those “young […]

New telemedicine companies like Hims and Roman have sprung up, offering online prescriptions for Viagra and other erectile-dysfunction medications. That erectile dysfunction can be a sign of other more worrying health problems – particularly in younger men – is well established among physicians. One doctor worries about losing the “window […] Dispensed: Prescribing guidelines at a buzzy men’s health startup, a depression drug moves one step closer to approval, and a leaked letter that’s fuelling a fight over high drug prices

Hello, This week was busy with a big M&A deal for a surgical robotics company and lacklustre results for the super-hot, $US35 billion NASH market. But in between the breaking news, here were the stories that caught our attention this week. New to our weekly newsletter? You can sign up […]

A buzzy startup is shaking up men’s health by prescribing generic Viagra online. But a move to relax guidelines has raised concerns among some of its doctor partners.

The trendy men’s-health startup Hims sells generic Viagra and other prescription medications online. Splashy ad campaigns have propelled the San Francisco-based company to prominence and toward a $US1 billion valuation. But a Hims-led effort to expand the number of online patients whom doctors could treat with generic Viagra has sparked […] For only $US5, the ad promises, we could get one month’s worth of erectile-dysfunction medication. The ad is for Hims, a men’s-health startup known for selling generic Viagra and medications for hair loss. In early November, Hims expanded into women’s health with Hers, a brand offering everything from skincare products […]