In an interview on Naomi Campbell’s YouTube series, “No Filter with Naomi,” Gwyneth Paltrow said she’d return to acting only if she’s “f—ing the writer.” Paltrow was referring to her husband, the TV producer and writer Brad Falchuk, who cocreated several TV shows with Ryan Murphy including “Glee,” “American Horror […] 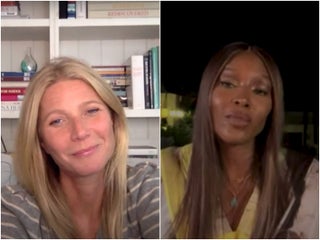 In a new personal essay written for Vogue, Gwyneth Paltrow explained how she and ex-husband Chris Martin came upon the term “conscious uncoupling” during their break-up, and eventual 2016 divorce. Paltrow said that the phrase, introduced to her by a therapist, initially “sounded a bit full of itself, painfully progressive […] 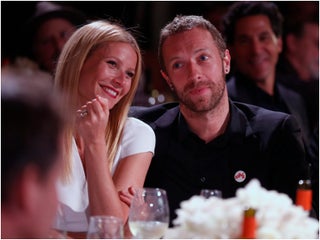 To celebrate the release of her Netflix series “The Goop Lab,” Gwyneth Paltrow is selling special-edition T-shirts that correspond with each episode. The $US55 T-shirts feature sayings like “It’s only a vulva,” “Psychonaut,” “Can’t drain me of this energy,” and more. The release of the T-shirts comes just a few […] Gwyneth Paltrow’s producer husband had to convince her into doing Netflix’s ‘The Politician,’ and even cut lines out of the show for her

“Avengers” actress Gwyneth Paltrow revealed in a new interview that her husband, “Glee” cocreator Brad Falchuk, had to convince her to join the cast of his new show, “The Politician.” “‘You know there’s no way I can do it,'” the actress said she told her husband, who had written a […] Gwyneth Paltrow hesitated to expose Harvey Weinstein because of controversy surrounding Goop, according to a new tell-all

A new book from New York Times reporters Jodi Kantor and Megan Twohey reveals what happened in the process of breaking the Harvey Weinstein sexual harassment story. Actress and founder of lifestyle brand Goop, Gwyneth Paltrow, played a key role in the investigation when she told Kantor and Twohey that […] Gwyneth Paltrow said she and husband Brad Falchuk don’t live together full time. Paltrow said her friends think it sounds ideal. Experts told INSIDER that even though it sounds unconventional, if it works for them, then it’s great. Visit INSIDER’s homepage for more stories. It’s said that absence makes the […] Gwyneth Paltrow says ‘Avengers: Endgame’ will be her last Marvel movie: ‘I’m a bit old to be in a suit’

Gwyneth Paltrow told Variety that “Avengers: Endgame” will be her final Marvel film. “I mean, I’m a bit old to be in a suit and all that at this point,” the actress, who plays Pepper Potts, said. “I feel very lucky that I did it, because I actually got talked […]

Gwyneth Paltrow claimed that she made yoga popular, and people are furious

Gwyneth Paltrow credited herself for popularising yoga during an interview with the WSJ. Magazine. “I remember when I started doing yoga and people were like, ‘What is yoga? She’s a witch. She’s a freak,'” the Goop founder said. Paltrow added: “Forgive me if this comes out wrong, but I went […]

Gwyneth Paltrow has shared the first photos of her wedding dress

Gwyneth Paltrow married TV producer Brad Falchuk in September. Goop has shared the first photos of the ceremony to the public. Paltrow wore a lace gown by Valentino. She later changed into a white, caped romper by Stella McCartney. Gwyneth Paltrow and Brad Falchuk quietly tied the knot in an […]