Georgia’s governor is deploying as many as 1,000 National Guard troops after deadly shootings in Atlanta over a violent Fourth of July weekend

The governor of Georgia has declared a state of emergency and authorised the deployment of up to 1,000 National Guard members to Atlanta in an executive order Monday. The move follows a weekend of violence that saw more than 30 people shot, five of whom were killed. One of the […] 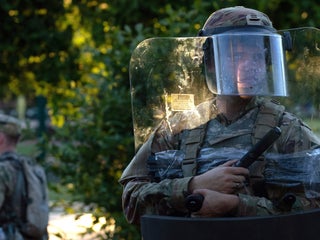 The Trump administration is downplaying the growing threat of white-supremacist terrorism. It is time for Congress to act.

White-supremacist violence in the US is growing, but the Trump administration is ignoring it. To combat the problem, the US must first collect accurate statistics on the violence and then fund programs to tackle the issue head on. Congress should also pass the NO HATE Act, legislation designed to greatly […] WalmartCEO Doug McMillon spoke to Fortune about the moment he learned of the El Paso shooting. The shooting took place in an El Paso Walmart store and claimed 22 lives. “What’s going through our minds first and foremost is the safety of our associates and our customers,” McMillon told Fortune. […] Nancy Pelosi slams Trump’s plan to declare a national emergency to fund the border wall, argues that he should declare one on gun violence instead

House Speaker Nancy Pelosi slammed President Donald Trump’s plan to declare a national emergency to fund a border wall without congressional approval. Pelosi said Trump’s decision amounted to an “end run around Congress” and set an unwelcome precedent for lawmakers in both parties. She suggested that, on the anniversary of […] Woman harassed for years by suspect in Capital Gazette shooting says she knew that if he ever carried out a mass shooting, it would target the newspaper

The woman who endured years of harassment and abuse at the hands of the man accused of attacking the Capital Gazette newsroom has spoken out. In an interview with the “Today” show on Monday, she recalled being “tormented” for years and being scared for her life even after moving out […]