US aircraft saw suspected Iranian gunmen take something from a hijacked tanker during 7-hour incident: official

A US official said that the situation looked like a shakedown and had "all the hallmarks of international piracy." 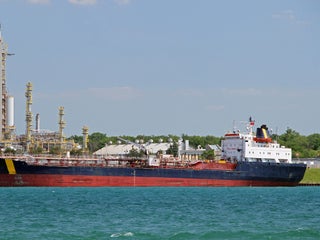 The events unfolding in the Gulf of Oman come on the heels of an apparent suicide attack on an oil tanker off the coast of Oman. 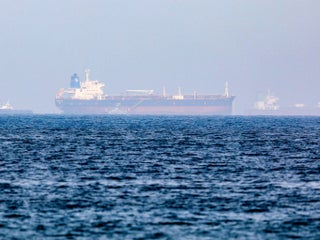 The US military, alleging Iran’s culpability, released photos of a suspected limpet mine attached to the hull of one of the two tankers attacked Thursday. The mine was placed high above the waterline, seeming to suggest that the purpose of the latest attacks may have been to shock rather than […] Owner of tanker attacked in Gulf of Oman blames ‘flying objects,’ seeming to contradict US suggestion that it was a mine

The owner of one of two oil tankers attacked in the Gulf of Oman on Thursday says the crew saw “flying objects” before the ship was hit, seeming to contradict the US government’s narrative. The US military said it saw what it thought was an unexploded mine on the side […] Oil prices on Friday were pushed and pulled between competing drivers of Iran tensions and a supply glut. Thursday’s attacks on two oil tankers raise the prospect of a US-Iran military showdown, experts warn. Broadcom shares are trading down 8.7% in US premarket after warning of a demand slowdown from […] WATCH: Iranian forces allegedly remove naval mine from tanker after US Navy rescues its crew members, US military claims

The US military released videos and pictures of what it alleged to be an Iran Revolutionary Guard Corps’ patrol boat removing what is believed to be an unexploded limpet mine from a tanker in the Gulf of Oman on Thursday. A limpet mine is an explosive charge that magnetically attaches […] The US Navy spotted what it suspects was an unexploded limpet mine attached to one of the two tankers attacked on Thursday. US Central Command (CENTCOM) later released photos of the mine, as well as video evidence of the crew of an Iranian gunboat attempting to take it. The mine, […] Photos and video show flames, ash, and charring on oil tanker after suspected torpedo attack in Gulf of Oman

New photos and video show the aftermath of a suspected torpedo attack on an oil tanker in the Gulf of Oman. The oil tanker was evacuated on Thursday after catching fire. The company that chartered the ship said it believed it was hit by a torpedo. The ship is one […] The price of oil surged on Thursday after a suspected torpedo attack on two tankers in the Gulf of Oman. West Texas Intermediate crude jumped 3%, while Brent crude jumped 3.8%. Oil was previously trading at five-month lows, reflecting a glut of US crude and concerns that the US-China trade […] An oil tanker is on fire after an apparent attack in the Gulf of Oman. The tanker is owned by the Norwegian company Frontline, and the company that chartered the ship said it was “suspected of being hit by a torpedo.” Frontline said the crew was safe. A second tanker, […] A massive ocean dead zone was just discovered in the Arabian Sea, and it could have ‘dire consequences’ for humanity

Researchers measured the world’s largest ‘dead zone’ in the Arabian Sea. It’s more than twice the size of Tasmania. Dead zones are areas of the ocean with low oxygen that can no longer support marine life. It’s caused by warming oceans and agricultural runoff. “The ocean is suffocating,” Bastien Queste, […]