Gucci is selling jeans with deliberate grass stains on the knees for £600 ($US770). The Italian fashion house also has denim overalls in the same style for £850 ($US1,092). Both items are part of Gucci’s mens ready to wear collection for Fall/Winter 2020. Visit Insider’s homepage for more stories. If […] 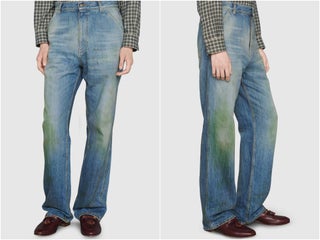 Italian designer Gucci is facing criticism for another look – an anklet that resembles an ankle monitor, or an ankle holster, with golden bullets attached to it. The leather anklet was featured as an accessory at a Gucci show during Milan Fashion Week in September. The “golden bullets” attached to […] On Tuesday, the Daily Mail reported that Poundland, a discount store in the UK, is currently selling an $US11.18, or £9, pair of sneakers that look nearly identical to a Gucci design. The sneakers are sold by PEP&CO, Poundland’s fashion label, and feature a black and red stripe covered by […] The Italian designer Gucci is facing criticism by many in the Sikh community over an almost $US800 ‘Indy Full Head Wrap’ that they say belittles their faith. The Sikh identity includes five articles of faith, the most visible aspect being the turban, which can be worn by both men and […] Gucci is selling a 3D-printed Mickey Mouse bag for $4,500

Gucci is selling a 3D-printed Mickey Mouse bag for $US4,500. It’s been created to mark the 90th birthday of the iconic Disney character. This isn’t the first time Gucci has incorporated Disney into its collections – the luxury fashion house has previously launched a Donald Duck capsule collection and sweaters […]

Gucci has apologised after receiving backlash over its balaclava knit top. People on social media said the $US900 sweater resembled blackface. “Gucci deeply apologizes for the offence caused by the wool balaclava jumper,” the brand said in a statement on Wednesday. The brand also confirmed the item had been removed […]

A Russian Orthodox priest deleted his Instagram account and apologised for posting photos with products from Louis Vuitton and Gucci. The church said it was investigating the priest and that he will be disciplined. The priest said he didn’t buy the designer shoes and bags, but took photos of them […]