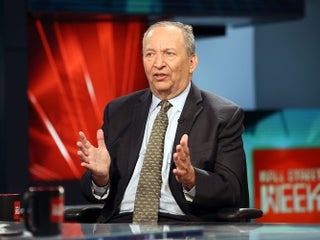 MANKIW: It Makes Sense To Me To Own Some Of Gold In An Investment Portfolio He has three big points. "Nothing in the toolbox of economists makes us good stock pickers." FORMER ROMNEY ECONOMIC ADVISOR: Yes, Middle Class Tax Rates Might Have To Be Hiked Too

[credit provider=”YouTube” url=”https://www.youtube.com/watch?v=VWLylAuLO2k”] Former Mitt Romney economic advisor Greg Mankiw admits something that he probably would never have said during the campaign: Middle class tax rates can’t be set in stone. They might have to rise, too.In a column at the NYT, Mankiw argues that if we’re going to get […] CRINGE: Greg Mankiw And The Harvard Economics Department Do ‘Call Me Maybe’

The Financial Times’ markets editor Chris Adams pointed us to a video that has us cringing. DEUTSCHE BANK: Here Are The Two Men Most Likely To Be Mitt Romney’s Fed Chief

[credit provider=”YouTube” url=”http://www.youtube.com/watch?v=3u2qRXb4xCU&feature=player_embedded#!”] Deutsche Bank is out with a big note about the Fiscal Cliff, the election, and general economic uncertainty.There’s a lot of meat in it, but one thing that stands out is the firm’s discussion of who will be the next Fed chief. The idea of replacing Bernanke […] Once upon a time (today), in a land not so far away (USA), there lived a trio of economic wizards (economists), whose names shall remain anonymous (Paul Krugman, Greg Mankiw, Ben Bernanke). A fourth wizard, Murry Rothbard, is no longer among the living but resides in the netherworld. The above […] [credit provider=”AP Photo/Pablo Martinez Monsivais”] Harvard students are planning to walk out of economist Gregory Mankiw’s Econ 10 class on Wednesday to show solidarity with the Occupy Movement, according to an email sent to students.Mankiw, chairman of the Council of Economic Advisers under President George W. Bush and the author […]