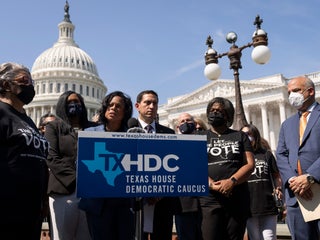 Democrats have repeatedly objected to the proposed districts, drawn by the Texas Senate, that would strip away seats in Hispanic and Black areas. 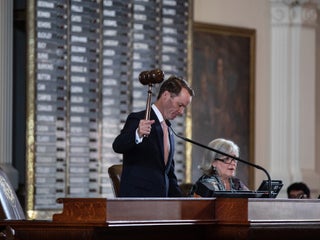 Rep. Dan Crenshaw’s misshapen, heavily gerrymandered congressional district may be getting a big makeover this year 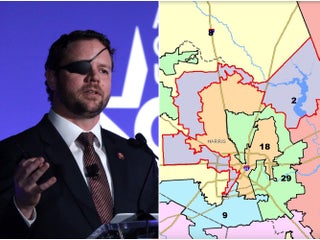 A graphic designer has now created a gerrymandering-themed font to raise awareness about fair maps. The font, which you can download at uglygerry.com, has one or combinations of multiple gerrymandered districts for each letter of the alphabet from A-Z. Gerrymandering occurs when legislatures draw districts to benefit one political party […] Federal courts cannot hear challenges to partisan gerrymandering, according to a 5-4 Supreme Court decision on Thursday. In her dissenting, Justice Elena Kagan warned that in the age of machine learning and artificial intelligence, this decision could put US democracy at risk: “Someplace along this road, ‘we the people’ become […] The Trump administration’s addition of a citizenship question to the 2020 census was at least partly based on analysis that adding the question would help Republicans win elections, according to new evidence. Plaintiffs challenging the legality of the citizenship question in federal court have recently come into possession of the […] New York City’s $US25 billion Hudson Yards project is the largest real-estate development in US history. The project has incited criticism over the years for relying on a pool of funds from immigrant visas. By securing at least $US1.2 billion in funding from an immigrant investor program called EB-5, Hudson […] New Jersey Democratic lawmakers are attempting to make Republicans a permanent minority, by law. The New York Times reported that a proposal making its way through the state’s legislature – a Democratic stronghold – would amend the New Jersey constitution to require district maps to reflect how major political parties […] Voters in a Pennsylvania House district have nicknamed the shape of their congressional boundary “Goofy kicking Donald Duck.” The state’s district maps, including the strangely shaped 7th district, were ruled unconstitutional by the Pennsylvania Supreme Court earlier this week. The court ruled the maps gave Republicans an unfair advantage. The […] What is gerrymandering?: The Supreme Court heard oral arguments for 2 cases that could overhaul American elections

The Supreme Court on Wednesday heard oral arguments on partisan gerrymandering – the justices’ second major case of its type in recent months. Gerrymandering refers to the practice of drawing political districts that give one party a lopsided advantage over the other in an election. Justice Anthony Kennedy is viewed […] VIDEO: The practice known as "gerrymandering" has a unique history with a drawing of a salamander. How this drawing of a salamander helped change American politics forever

VIDEO: The practice known as "gerrymandering" has a unique history with a drawing of a salamander.