If Ngannou, the hardest-hitter in UFC history, fought Jones, the event could become one of the best-selling ever. 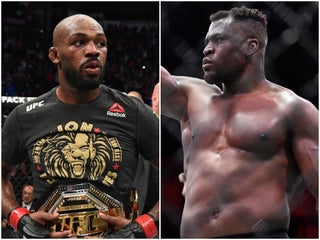 Watch a new UFC champion get crowned as Francis Ngannou, who endured child labor in Cameroon and homelessness in France, finally realizes a dream. 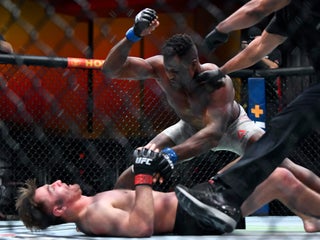 Francis Ngannou has been compared to Mike Tyson. The big-punching heavyweight just beat Junior dos Santos in 71 seconds Saturday, and is now campaigning for a UFC title shot against the winner of Dan Cormier and Stipe Miocic’s rematch in August. After the win, Ngannou was seen confronting the UFC […] Francis Ngannou says his unprecedented knockout power is a result of child labour in Cameroon. Ngannou grew up in poverty in Batie, a small town in west Africa. He worked as early as 10 years old, in sand mines. He is also from a family of strong men. His father […] Francis Ngannou is “hopeful” he will one day compete in a high-profile super-fight in boxing, just like Conor McGregor did in 2017. McGregor lost in the 10th round to Floyd Mayweather in what was his debut in the sport. But this has not put off Ngannou, who told us he’s […] Francis Ngannou’s scary power was on display in Phoenix, as he collapsed Cain Velasquez in 26 seconds. But Ngannou’s night was not yet over as he then insulted Brock Lesnar before calling out the UFC heavyweight champion Dan Cormier. A future UFC title fight between Ngannou and Cormier could well […] Heavyweight champion Anthony Joshua could leave boxing and compete in UFC. Joshua admitted he would need a few fights to get used to the submission aspect of life in a UFC octagon, but has his eyes on two major UFC stars. Fights against hulking heavyweight Francis Ngannou and former light […]