Foie gras will soon be illegal in New York City. We went to one of the last foie gras farms in the US to see what's next for the controversial dish. 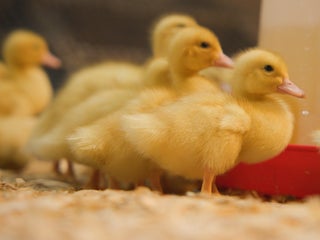 But you'll have to pay. Hey Californians: Here Are The 11 Weirdest Foie Gras Dishes That Are Now Illegal To Put In Your Mouth Force-Feeding Geese For Foie Gras Is Gruesome, But Nothing Delicious Comes Without Its Costs

The other day, we were doing one more time what on Sunday will become illegal in California: eating foie gras in a restaurant. Pan seared foie gras “traditionally raised in Sonoma, California,” served with poached local apricots. I’d go to jail for this willingly. We were sitting at the edge […]

[credit provider=”Flickr via jlastras” url=”http://www.flickr.com/photos/jlastras/3239314451/sizes/z/in/photostream/”] California is in the final countdown until foie gras becomes illegal in the state. The ban officially starts July 1 at midnight, California time.Chefs and restaurants around the state are planning some upscale farewell meals in honour of the occasion. [credit provider=”Flickr via jlastras” url=”http://www.flickr.com/photos/jlastras/3239314451/sizes/z/in/photostream/”] A few years ago, a study out of Newcastle University in England found that cows that were given names produce more milk.One of the academics in charge of the study was quoted by CNN saying: “Just as people respond better to the personal touch, cows feel happier […]