Iran says a string of colossal failures caused its troops to shoot down a passenger jet, killing 176 people

A new report from Iran’s Civil Aviation Organisation indicates that a string of massive failures led Iran’s military to shoot down a passenger jet and kill 176 people early this year. The Iranian report says the country’s military shot down Ukraine International Airlines Flight 752 in January because of human […] 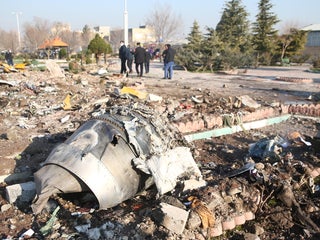 A leaked recording shows Iran knew from the start it had shot down a passenger jet, Ukraine says

Ukraine on Sunday accused Iran’s government of knowing immediately that it shot down a Ukrainian passenger jet last month despite denying responsibility for days. According to Reuters, Ukrainian President Volodymyr Zelensky cited a leaked audio recording of an Iran Aseman Airlines pilot communicating with air-traffic control in Tehran. The pilot […] Iran’s military knew it accidentally shot down a passenger plane moments after it happened, and a stunning new report details how it was covered up — even from Iran’s president

On January 8, a passenger plane carrying 176 people crashed outside of Tehran, in Iran. Everyone on board was killed in the crash. The plane was shot down by two antiaircraft missiles fired, by mistake, by Iran’s Revolutionary Guards. Iran’s military was on high alert in early January after the […] Iran says it is making arrests after its military shot down a passenger plane with a missile, killing 176 people

Iran announced Tuesday that some individuals believed to be responsible for the Iranian shoot-down of Ukraine International Airlines flight 752 have been arrested. Flight 752 was shot down by an Iranian anti-aircraft missile last Wednesday amid elevated tensions with the US, Iran admitted over the weekend after days of denial. […]

Canadian Prime Minister Justin Trudeau said on Thursday that intelligence indicated that the plane crash that killed 63 Canadians was downed by an Iranian missile. All 176 people aboard the flight were killed in the crash.News reports on Thursday cited US officials as saying that an Iranian surface-to-air missile likely […] The Ukrainian flight that crashed in Iran was ‘highly likely’ shot down by a missile, according to reported US intelligence

US officials believe that Ukraine International Airlines Flight 752 was likely shot down by an Iranian surface-to-air missile, according to multiple reports on Thursday. US officials told The Associated Press that it was “highly likely” that Iran was responsible. Defence officials told Newsweek and others that the plane was probably […]