A javelina was filmed running super fast through a residential area in Tucson, Arizona. It runs really, really fast. What even is a javelina? The javelina, also known as collared peccary or musk hog, is not a pig or boar, despite resembling both. Video of the javelina was sent into […] 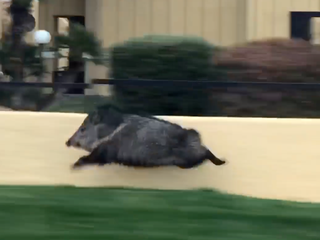 Wild pigs are a menace, causing over $1 billion in damages each year in the US alone. Here are 5 facts you probably didn’t know about them.

A new report from Sports Illustrated sheds light on the US feral pig population. According to SI, pigs cost the US more than $US1.5 billion a year in damage to crops, landscapes, and water. Texas is populated with 2.6 million wild hogs, a number sure to grow if eradication efforts […] Mark Zuckerberg has an unconventional hobby: hunting wild boars with a bow and arrow

Mark Zuckerberg has an unconventional hobby: hunting wild boars with a bow and arrow. Zuckerberg said he goes bowhunting, in response to a comment on his recent Facebook post outlining his resolutions for the new decade. The Facebook cofounder and CEO has previously challenged himself to only eat meat that […] South Korean residents near the North Korean border uncovered a long stream of blood flowing toward one of Seoul’s main freshwater sources earlier this week. The blood stream was the result of a mass pig culling gone wrong. South Korean officials killed over 47,000 pigs thought to have been infected […] The man behind the viral ‘feral hog’ tweet spoke out for the first time, and he shared that feral hogs invaded his yard several times

Willie McNabb, the man who unwittingly shot to viral fame after tweeting about feral hogs, spoke out for the first time since his tweet became a meme (and the best thing on the internet this week. Sorry, “green-shirt guy“). In a statement to journalist Yashar Ali, McNabb explains his background, […]