Former convicts in Florida – more than 1 million people – will be allowed to vote in the 2020 elections. The Florida Rights Restoration Coalition is canvassing door to door trying to register voters, despite hurdles from the state’s Republican-controlled legislature. Former convicts, or returning citizens, are disproportionately Black and […] 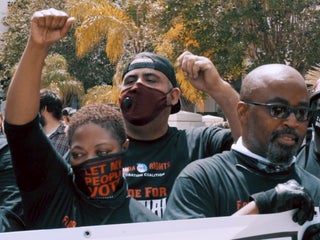 Democratic presidential candidate Andrew Yang said during an INSIDER town hall on Tuesday that he supports all incarcerated people, except murderers, being able to vote. The idea that ex-convicts and the incarcerated should have the right to vote has emerged as the latest policy debate among 2020 Democrats. “I think […] Bernie Sanders is doubling down on a divisive plan to give all prisoners the right to vote. Here’s why that could be a brilliant political move.

Sen. Bernie Sanders in a Tuesday op-ed said he makes “no apologies” for supporting the enfranchisement of all currently incarcerated people. “If we are serious about calling ourselves a democracy, we must firmly establish that the right to vote is an inalienable and universal principle that applies to all American […] Roughly 75% of people do not agree with Sen. Bernie Sanders that all prisoners should have voting rights, according to a new INSIDER poll. Overall, 35% said current inmates should be allowed to vote, but most of those people said this should only apply to non-violent offenders. The poll found […] Sen. Bernie Sanders on Monday said all prisoners, regardless of their crimes, should be allowed to vote. His stance on this issue has sparked Republican ire and division among 2020 Democrats. While some criminal justice experts say the idea goes too far, others argue that the change could help improve […] Gov. Kim Reynolds of Iowa proposed Tuesday that the state amend its constitution to remove its lifetime voting ban on people with felony convictions. The amendment could restore voting rights to 52,000 Iowans. Florida residents voted on a similar constitutional amendment last year, and if Iowa follows suit, only two […] Floridians with felony convictions are now beginning to register to vote after the state restored voting rights to 1.5 million felons

Despite record voter turnout, 6 million Americans were unable to vote in the 2018 midterm elections because of a previous felony conviction. In Florida, which had one of the strictest laws in the country, one in 10 voting-age adults and almost one in four African-American adults were barred from voting […]