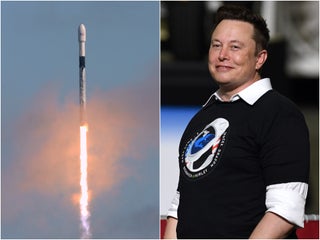 Watch SpaceX’s ‘most difficult launch ever’ SpaceX’s Falcon Heavy has successfully launched the first ‘solar sailing’ spacecraft into orbit. It will be powered purely by light.

SpaceX launched its third Falcon Heavy rocket, the world’s most powerful operational launch system, at 2:30 a.m. ET on Tuesday. The rocket deployed 24 satellites into orbit around Earth, including an atomic clock for NASA, the ashes of 152 people, and LightSail 2, an experiment that could change how vehicles […] Space X is testing the concepts and ideas behind StarShip, its next big rocket, in south Texas. The multibillion-dollar project includes a prototype rocket called the Starhopper to test the enormous new rapper engines that will be propelling future spacecraft. With the StarShip, Elon Musk’s company plans to send people […] SpaceX, the aerospace company founded by Elon Musk, is poised to launch people to the moon for the first time in more than 45 years. In February, SpaceX successfully test-launched a Falcon Heavy rocket, making it the world’s most powerful operational launch system. As proof of its oomph, Falcon Heavy’s […] Tesla and SpaceX are already starting to merge — here’s how

A Tesla-SpaceX merger has been discussed on Wall Street. There are plenty of arguments in favour of a deal. But with the Falcon Heavy launch and the Tesla Roadster’s journey to space, the two companies are effectively already conjoined. Tesla – I mean SpaceX – made spectacular news and restarted […]

This week SpaceX launched Falcon Heavy, the most powerful operational rocket in the world. SpaceX founder Elon Musk’s Tesla was the payload, helmed by a spacesuit-wearing dummy. The car was launched toward Mars orbit, but Musk said SpaceX had “no plan” to track it on its journey. However, two astronomers […]

SpaceX on Tuesday launched its powerful Falcon Heavy rocket for the first time. The test payload was Musk’s own Tesla Roadster, fitted with cameras and a dummy wearing a SpaceX space suit. But a former NASA official says a SpaceX vice president told her the company offered NASA and the […] There is nothing like seeing a rocket launch toward space in person, and the first flight of SpaceX’s three-booster Falcon Heavy system was no exception. As a space reporter, I’ve see a handful of space shuttles and a Mars robot leave Earth, but Falcon Heavy’s maiden flight blew them all […]

SpaceX successfully launched its Falcon Heavy rocket carrying Elon Musk’s 2008 Tesla Roadster, complete with a dummy driver named “Starman” wearing a SpaceX spacesuit, into space on Tuesday. The payload was able to capture live footage of its journey through space for a time as it made its way toward […] A car ad in space finally brought the country together

SpaceX launched a Tesla into space atop its Falcon Heavy rocket on Tuesday. The video feed of the event was the second most viewed YouTube livestream of all time. For a moment, the excitement was a respite from feelings of division in our country. Yesterday afternoon, Americans gathered around to […] SpaceX just launched a Tesla Roadster to Mars on this: SpaceX’s Falcon Heavy rocket. This was the Falcon Heavy’s maiden flight. It’s the launch that everyone’s been waiting for. The Falcon Heavy is a monster. It has 27 engines, can generate more power than 18 747 jumbo jets, and is […] SpaceX has launched Falcon Heavy, the most powerful rocket the company has ever built. After its launch, the company’s founder, Elon Musk, called for “a new space race.” Falcon Heavy’s cost of $US90 million a launch, made possible by reusable rockets, will vastly undercut SpaceX’s competitors. CAPE CANAVERAL, Florida – […] Here’s why it says ‘DON’T PANIC!’ on the dashboard of the car Elon Musk just shot toward Mars

SpaceX has launched Falcon Heavy, the most powerful rocket the company has ever built. The rocket lifted off Tuesday from a historic Apollo-era launchpad at Kennedy Space Center in Florida, where Business Insider is on the ground. Musk put his Tesla Roadster on top as a test payload. The car […] SpaceX has launchedFalcon Heavy, its most powerful rocket to date. On Tuesday, the 23-story-high system ignited and blasted off from Launch Complex 39A in Florida, the same platform where the Apollo astronauts took off for the moon decades ago. Minutes later, two of the rocket boosters landed safely back on […] SpaceX successfully launched its Falcon Heavy rocket into space on Tuesday. As its test payload, the rocket carried Elon Musk’s 2008 Tesla Roadster, complete with a dummy driver named “Starman” wearing a SpaceX spacesuit. The car is equipped with cameras, and you can watch the Roadster’s journey via a live […]