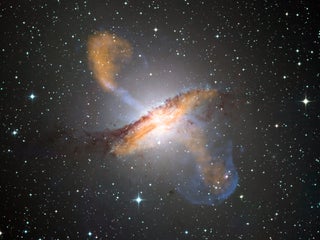 Scientists just released the first-ever photograph of a black hole. Some people think it looks like a ‘smudge on the lens.’

We just got the first-ever image of a black hole, the result of around 13 years work by scientists from 40 nations. However, some people saw the image as disappointing, and claimed that it looked like a smudge on a camera lens. The image is actually similar to what scientists […] Astronomers have taken the first image of a black hole using the Event Horizon Telescope. The black hole is a supermassive black hole located 55 million light years away in the heart of the Messier 87 galaxy. For years, experts thought it was impossible to see a black hole through […] The first-ever picture of a black hole is fuzzy. These incredible illustrations help explain what it shows.

Scientists on Wednesday published the first picture of a black hole, which was put together using the Event Horizon Telescope. The radio-wave photo shows a supermassive black hole, its event horizon, and its accretion disk at the center of galaxy Messier 87. Researchers expected the image to look “fuzzy” but […] ‘Like looking at the gates of Hell’: Astronomers just revealed the first picture of a black hole, and it’s a monster

The Event Horizon Telescope on Wednesday released the first picture of a black hole. The picture is somewhat fuzzy but shows the “shadow” of a black hole caused by its event horizon, or point of no return. Scientists from 20 nations spent roughly 13 years working to create the photo, […] The first ‘groundbreaking’ pictures of a black hole may be unveiled on Wednesday. Here’s what scientists think those images will look like.

The Event Horizon Telescope, which endeavours to photograph black holes, is making a “ground-breaking” announcement on Wednesday. Scientists expect the announcement will unveil the first-ever pictures of a black hole‘s “shadow” caused by its event horizon, or point-of-no-return for light. The images could be of the Milky Way’s supermassive black […]