The second Boeing 737 Max crash happened a year ago, here’s what went down, the unanswered questions, and the ongoing fallout.

Ethiopian Airlines Flight 302 crashed near Addis Ababa one year ago Tuesday. It was the second of two fatal Boeing 737 Max crashes within just five months. Both crashes have been attributed to a faulty automated flight-control system called MCAS. However, it was the second crash that confirmed to the […] 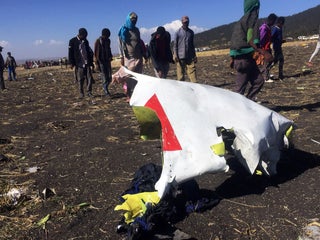 Ethiopian Airlines buried the unidentified remains of 737 Max crash victims in a funeral ceremony on Thursday, the BBC reported. However, family members of victims only had “days” of notice, and only two victims’ relatives were able to get to the ceremony in time. The lead counsel representing victims’ families […] ‘There was no way that they could’ve survived’: A Boeing 737 Max victim’s mum and brother are demanding justice from the FAA

24-year-old Samya Stumo was one of 157 killed when a Boeing 737 Max flown by Ethiopian Airlines crashed in March – the second fatal crash involving the new plane within five months. After FAA officials testified in front of a Senate committee, Stumo’s mother and younger brother drove to Washington, […] Boeing announced that it hired the attorney Kenneth Feinberg to manage distributions of the first $US50 million of a $US100 million fund set aside for families of people killed in the two Boeing 737 Max crashes. Paul Njoroge, who lost his three children, his wife, and his mother-in-law in the […] Paul Njoroge lost his three children, his wife, and his mother-in-law in the Ethiopian Airlines Boeing 737 Max crash in March. It was the second of two deadly 737 Max crashes in the span of five months. Njoroge testified in front of a congressional hearing on aviation safety on Wednesday. […] The March 10 Ethiopian Airlines crash that killed all 157 people on board has parallels to the October Lion Air crash of the same Boeing model that killed 189 people, according to Ethiopia’s transport minister. The two crashes have resulted in the worldwide grounding of the Boeing 737 Max aircraft. […]