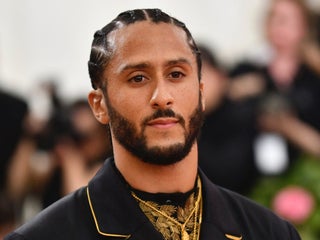 The San Francisco 49ers have posted on their social media platforms for #BlackoutTuesday in support of the Black Lives Matter movement. Fans and internet users are noting the hypocrisy surrounding the team’s gesture given their treatment of Colin Kaepernick when he played for the team. The former NFL quarterback and […] 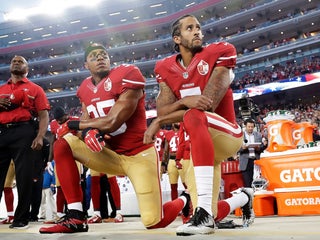 Stephen A. Smith and Eric Reid are feuding over Colin Kaepernick’s NFL workout, which some are calling a ‘publicity stunt’

Carolina Panthers safety Eric Reid feuded with ESPN talking head Stephen A. Smith over the blackballed quarterback’s NFL workout this weekend. Reid kneeled alongside Colin Kaepernick when the pair played for the San Francsico 49ers. Smith posted a rant to Twitter in which he said Kaepernick didn’t actually want to […] Colin Kaepernick and Eric Reid have reached a settlement with the NFL regarding their collusion case against the league. Kaepernick and Reid filed their case after protesting police violence and systemic racism by taking a knee during the national anthem before NFL games. Since filing, Reid has returned to the […] Carolina Panthers safety Eric Reid was ejected for a late, head-first hit on Cam Newton. Roethlisberger was sliding after making a play with his legs, when Reid came in head-first and made contact with Roethlisberger’s head. A scuffle ensued on the field as Steelers players went after Reid to defend […] Eric Reid is back in the NFL and played in his first game on Sunday after signing with the Carolina Panthers. Reid is a former teammate of Colin Kaepernick with the San Francisco 49ers and was the first player to join him in kneeling during the national anthem before games. […] Safety Eric Reid, who protested police brutality alongside Colin Kaepernick, has signed a one-year deal with the Carolina Panthers. Reid had also joined Kaepernick’s grievance against the NFL accusing the league of colluding against the pair. According to reports, Reid has no plans of backing off the grievance despite now […] NFL safety Eric Reid has reportedly filed a collusion grievance against the NFL. Reid, a former member of the San Francisco 49ers, was one of the first players to join Colin Kaepernick in kneeling during the national anthem to protest social injustice. Reid is reportedly using the same attorney as […]

Free agent safety Eric Reid believes his support of Colin Kaepernick’s protests are why he has not been signed yet. Reid knew this could happen and is ok with whatever impact the reaction to his protests have on his career. Reid joins Kaepernick as a notable example of a protester […]