Trump said at a Fox News town hall forum that he was intending to reduce funding for Social Security and Medicare, two of the largest federal entitlement programs. “Oh, we’ll be cutting,” he said. “We’re also going to have growth like you’ve never seen before.” The move would be a […] 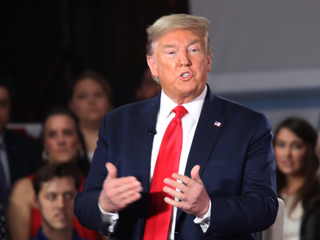 President Trump charged Democrats with trying to “destroy” Social Security and doubled down on his promise to “save” the program. Trump said in a Thursday tweet: “Democrats are going to destroy your Social Security. I have totally left it alone, as promised, and will save it!” It’s a stark reversal […] President Trump appeared to be open to cutting entitlement spending on Social Security and Medicare in a CNBC interview that aired Wednesday. He said a reform effort could occur at the “right” moment and appeared to credit the economy for providing momentum. The White House didn’t respond to a request […] The Australian Council of Superannuation Investors (ACSI) revealed the 10 highest paid CEOs in the ASX200 listed companies, with Qantas chief executive Alan Joyce coming out on top. The 10 CEOs on the list earned more than $10 million dollars, with Joyce earning more than $23 million. The report also […]

Americans hate Republicans’ idea to cut Medicare, Medicaid, and Social Security to bring down the soaring deficit. And they have another idea the GOP won’t like.

The federal deficit hit $US779 billion in fiscal year 2018, the highest since 2012. Republicans have suggested that the US needs to cut entitlements – Medicaid, Medicare, and Social Security – to get the deficit under control. But most Americans would rather reverse the GOP tax law and raise revenue […] House Speaker Paul Ryan has long wanted to enact entitlement reforms through cuts to Medicaid, Medicare, and Social Security. Ryan said in December that he wanted to tackle the issue in 2018. On Friday, Ryan admitted that these programs would not see changes in the upcoming legislative year. House Speaker […] Republican member of Congress: Trump said he would go after Social Security ‘the first day of his second term’ An NBER working paper study finds that the extension in unemployment benefits during the great Recession may be responsible for weak jobs growth. YARDENI: Disposable Personal Incomes Are Rising For The Wrong Reasons

This can't be sustainable. Immigrants May Be The Best Hope For Desperate Baby Boomers

I was born in 1946, just when the boomer wave began. Bill Clinton was born that year, too. So was George W. Bush, as was Laura Bush. And Ken Starr (remember him?) And then, the next year, Hillary Rodham was born. And soon Newt Gingrich (known as “Newty” as a […] [credit provider=”Courtesy of WhiteHouse.gov”] President Barack Obama will pivot back to the economy and jobs during his State of the Union Tuesday, shifting away from the progressive social agenda that he pushed in his second inaugural address. Senior White House officials say that the Obama will use the State of the […]