A photographer took stunning photos of a couple’s beach proposal, and the internet helped her find them

Holly Breeden, a photographer based in Suffolk, Virginia, was doing a maternity shoot on the beach when she saw Daniel Ray and Anna Threats. Breeden was in the right place at the right time when Ray got down on one knee to propose to Threats, and she was able to […] 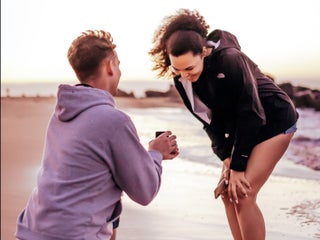 Melanie Jackson Stinson took a picture of a couple getting engaged at Yosemite National Park in 2009. She took down the man’s email at the time, but subsequently lost it and was never able to find the couple. Over 10 years later, she posted the photo on Facebook in the […] A couple’s attempt to re-create a picture-perfect engagement photo with a bottle of Champagne totally backfired, but the result is going viral

Alyssa Snodsmith, 24, and Collin Hewett, 23, went viral for sharing their failed attempt to re-create a Pinterest picture for their engagement photo. Snodsmith stumbled upon the photo of Alex and Tammy Shields, taken by Brianna Bender in 2018, while looking for inspiration for engagement-shoot poses. But when Hewett tried […] 2 storm chasers got engaged as a tornado spiraled toward them

Joey Krastel always knew that he would propose to his boyfriend Chris Scott while a tornado was breathing down their necks, NBC News reported. Early in their relationship, the couple bonded over a shared love of tornadoes and chasing extreme weather. So on Tuesday, Krastel got down on one knee […] A British discount store which sold 20,000 ‘engagement rings’ for $1.30 each says people are using them as ‘placeholders’ until they can afford the real thing

UK discount shop Poundland has sold 20,000 fake engagement rings in one week. It says its “Bling Ring” range is so popular that it is now the UK’s biggest engagement ring retailer. The £1 ($US1.30) rings come in four styles and a number of sizes. Poundland says people are using […]