Ed Stack, CEO of Dick’s Sporting Goods, steps down after 36 years at the helm. He will be replaced by president Lauren Hobart, the first Dick’s CEO from outside the Stack family.

The CEO of Dick’s Sporting Goods, Ed Stack, will step down in February, the company announced Tuesday. The 850-chain retailer’s current president, Lauren Hobart, has been elected by the board of directors to become CEO and president from February 2021. Stack, who has been CEO since he bought the business […] 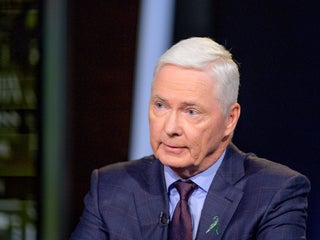 Dick’s Sporting Goods CEO Ed Stack had an “emotional” meeting with the families of several Parkland victims after the retailer he runs exited the gun business. In an October interview with Business Insider, Stack said he was awed by the “rational” and “common-sense” things the grief-stricken relatives had to say […] Dick’s Sporting Goods CEO Ed Stack said that “buycotts” in support of the company’s decision to nix sales of AR-15-style rifles were “appreciated” but insignificant from a financial perspective. In a recent interview with Business Insider, Stack said that boycotts of Dick’s ended up having a far greater impact on […] Dick’s Sporting Goods CEO Ed Stack is reportedly testing the idea of running as a third-party candidate in the 2020 presidential election. According to a new report from Politico, a focus group in Wisconsin was shown videos with Stack messaging and asked whether they would consider voting for a third-party […] Dick’s Sporting Goods CEO Ed Stack credited Dwayne “The Rock” Johnson with helping to shape up his company’s Under Armour sales. In 2018, Stack expressed concerns that Under Armour’s “expanded distribution” strategy was hurting sales of the athletic apparel at his sporting goods retailer. Under Armour first partnered with Johnson […] Dick’s Sporting Goods CEO Ed Stack supports HR8, a bill that would require background checks for all firearm sales. The bill passed in the House of Representatives in February, but Republican Senate Majority Leader Mitch McConnell has not yet brought it to a vote in the Senate. Citing a swell […]