President Rodrigo Duterte has threatened to arrest those who refuse Covid-19 vaccines, as the nation grapples with one of Asia's worst outbreaks. 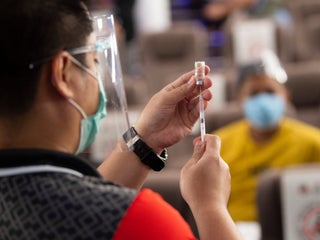 More than 122 children have been killed in the Philippines’ ‘war on drugs,’ and police have been responsible for over half of the killings

More than 122 children in the Philippines have been killed since July 2016 due to President Rodrigo Duterte’s ‘war on drugs.’ The deaths have been either on purpose, as replacements for real targets, or due to mistaken identities since 2016, according to a new study. The study done by the […] 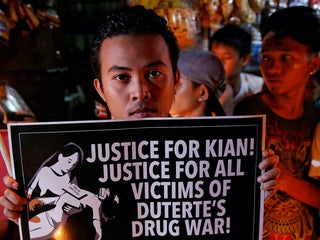 The Philippines’ largest television network, which refused to air Duterte’s 2016 presidential campaign, has been forced off air, striking a blow to media freedom

On Tuesday, the Philippines’ largest television network ABS-CBN was ordered to stop broadcasting. The order didn’t come out of nowhere. President Rodrigo Duterte has been feuding with ABS-CBN since the network refused to air his 2016 presidential campaign ads. The station has also closely documented Duterte’s deadly war on drugs, […] 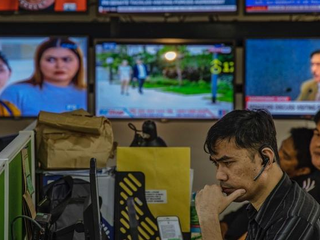 In a televised address on Wednesday, Philippine President Rodrigo Duterte told his country of 107 million that the police and military would shoot troublemakers dead. Duterte made the announcement after residents of Luzon, an island in the Philippines with 57 million people on lockdown, held a protest over a lack […] 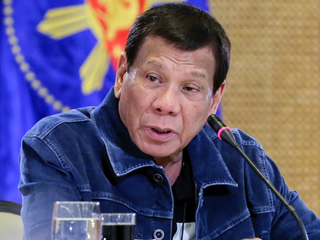 A US human rights worker was shot outside his home in the Philippines. He was branded an ‘enemy of the state’ in 2015

A US human rights worker is in critical condition after being shot in front of his home in the Philippines, as activists and rights workers continue to be targeted in the country’s crackdown on dissent. According to Cordillera Peoples Alliance, a local indigenous rights group, Brandon Lee, 37, was shot […] Facebook was once a hot startup looking to conquer the world. Today, my journalist friends in the Philippines grapple with threats and lies on the social network

Facebook was once a startup focused on convincing Wall Street that it could continue growing and making more money. They did this partly by expanding to pretty much every corner of the world – including my homeland, the Philippines. But Facebook turned into a platform used to defend Philippine President […] A Filipino senator apologised on Monday after responding to the death of a three-year-old girl shot during a drug raid by saying “shit happens.” Last month, three-year-old Kateleen Myca Ulpina was shot and killed by police during a drug bust as part of Philippines President Rodrigo Duterte’s brutal war on […] China’s One Belt One Road project and massive infrastructure loans are helping to weaken opposition to its claims in the South China Sea. The South China Sea is of critical importance to China which has created new islands through dredging for military bases, and consistently defended its claims despite protests […] Philippine President Rodrigo Duterte addressed some concerns about his health during a speech on Thursday. “I don’t know where I’m now physically” he told soldiers and police officers attending a televised dinner he was hosting. Without explicitly saying he may have cancer, Duterte said he would not stay in office […] Philippine President Rodrigo Duterte on Tuesday summoned about 100 cops accused of various crimes to his palace driveway and unloaded on them in front of the media. He also said he would deploy a “special unit” to hunt and kill cops involved with drug or crime syndicates. Duterte’s harsh drug […] The Philippine immigration authority has ordered the deportation and blacklisting of an Australian nun who was investigated for her political activism per instructions from President Rodrigo Duterte. The authority said 71-year-old Sister Patricia Fox “poses a risk to public interest” and has been accused of violating the terms of her […] Philippine President Rodrigo Duterte said he ordered an Australian nun be detained and investigated. The 71-year-old nun was detained on Monday after taking part in human rights missions that the country deemed violated the country’s sovereignty. Duterte also called out Australia, saying that its citizens should should reflect on their […]

The Philippines’ legislature has taken major steps towards legalizing divorce in the highly Catholic country. The bill would need to be supported by President Rodrigo Duterte, who has stated that he is strongly against divorce. But while the president has taken a hardline view on ending marriages, he has surprisingly […]

Philippines’ President Rodrigo Duterte slammed the International Criminal Court, who are leading an investigation into his bloody war on drugs, as it is part of the “white idiots in the EU.” Duterte urged other nations to “get out” of their membership with the ICC because it is a “rude” organisation. […] Philippines President Rodrigo Duterte told security personnel not to participate in any probes against his bloody war on drugs. In 2016, the Philippines government formally invited the UN rights rapporteur Agnes Callamard to investigate Duterte’s controversial killings. Duterte back peddled in 2017, and said he would only cooperate if a […] While hosting a gala dinner, Philippines... Filipinos and Filipino-Americans greeted the... Global affairs expert: There are populist leaders like Trump all around the world VIDEO: Philippines president Rodrigo Duterte is being criticised for comparing himself to Hitler, saying he would be "happy to slaughter" 3 million drug addicts in his country. The Philippines’ bloody anti-drug war could be wildly counterproductive

The bluster and vitriol of the Philippines'...