Jones, who served in the Senate from 2018 to 2021, has known the president for decades and was on the shortlist to serve as US attorney general. 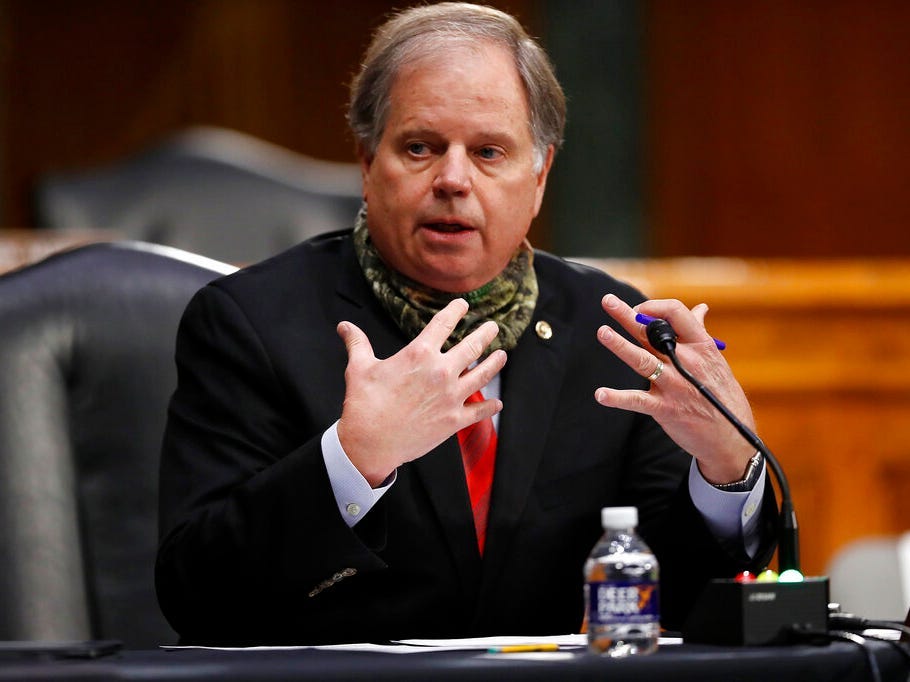 ‘Your personal feelings don’t dictate who Alabama picks as their Senator’: former Attorney General Jeff Sessions lashes out at Trump after he endorsed Sessions’ political opponent

Former US Attorney General Jeff Sessions snapped back at President Donald Trump after the president tweeted Sessions “let our country down” and endorsed his political opponent. “Your personal feelings don’t dictate who Alabama picks as their Senator, the people of Alabama do,” Sessions tweeted in response to Trump. Sessions is […] 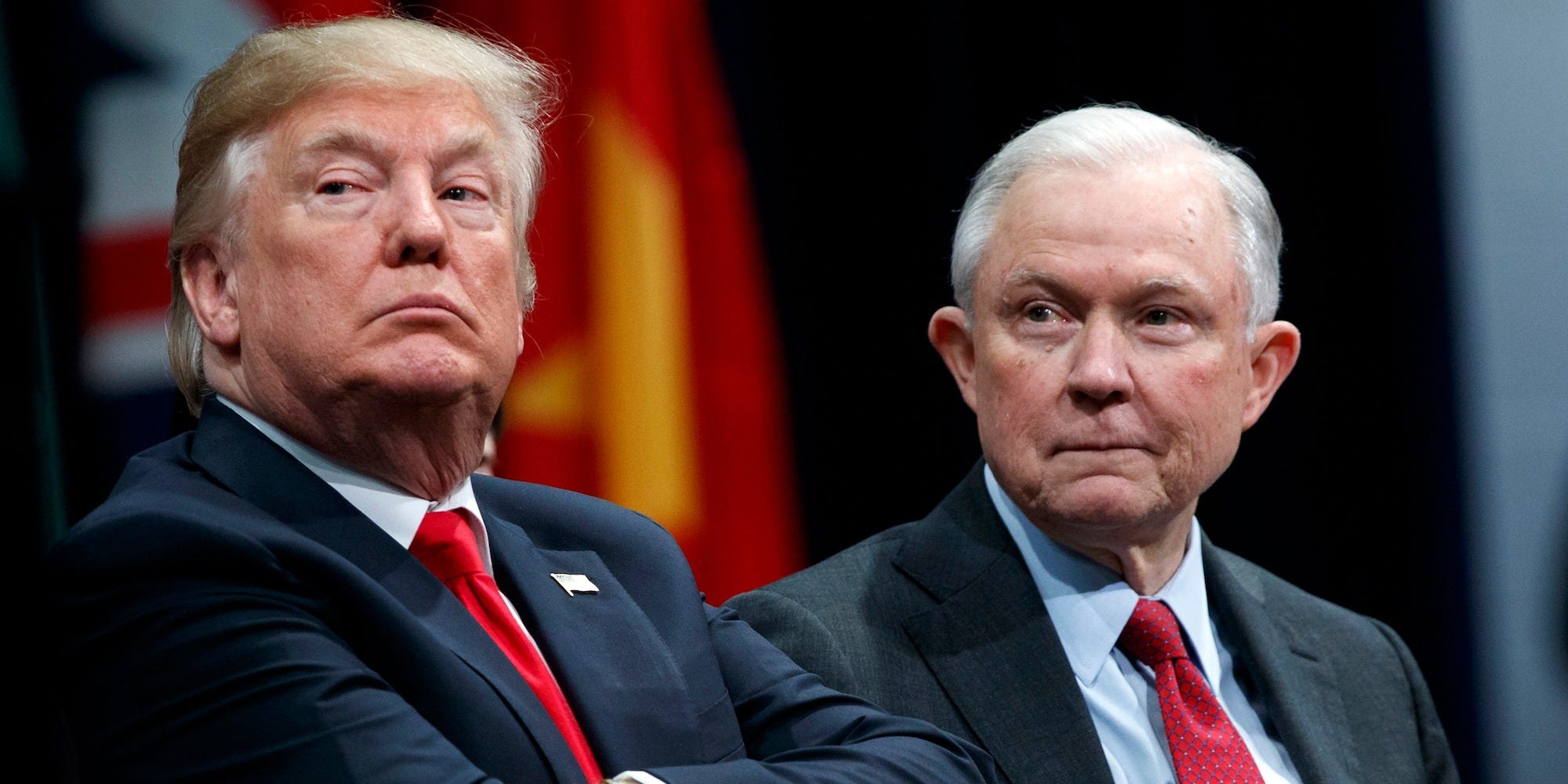 Attorney General William Barr’s testimony at a Senate Judiciary Committee hearing on Wednesday rankled numerous Democratic lawmakers, even some of those who voted to confirm him. Three Democratic senators voted in favour of Barr’s confirmation in February: Sens. Joe Manchin of West Virginia, Doug Jones of Alabama, and Kyrsten Sinema […]
News Feb. 26, 2019, 4:27 AM

Alabama Sen. Doug Jones says ISIS bride Hoda Muthana should be allowed back into the US to face the criminal justice system

Alabama Sen. Doug Jones said Hoda Muthana should be allowed to return to the US from Syria and face the criminal justice system. Muthana, 24, left Alabama when she was 19 to join ISIS in Syria, and now wants to return to the US with her 18-month-old son. President Donald […]
News Jul. 19, 2018, 4:16 AM

President Donald Trump threatened “tremendous retribution” against the European Union, including tariffs on cars, unless European Commission President Jean-Claude Juncker offers major trade concessions next week. The threat comes as the auto industry ramps up its campaign to try to dissuade Trump from imposing auto tariffs. Republican lawmakers are also […]
News Dec. 29, 2017, 7:08 AM

Roy Moore’s failed Senate campaign is trying to block the certification of the Alabama special election results. Moore’s spokeswoman claims a failure to investigate their voter fraud claims will have repercussions from voters. The spokeswoman gave a heated interview to CNN. A spokeswoman for failed US Senate candidate Roy Moore […]
News Dec. 29, 2017, 3:23 AM

Former Alabama Senate candidate Roy Moore claims to have passed a polygraph test refuting claims of sexual misconduct in a lawsuit to block the certification of Alabama’s special election. The complaint does not have the results of the polygraph attached. Roy Moore, the Alabama GOP Senate candidate who lost to […]
News Dec. 29, 2017, 1:51 AM

On Thursday, Alabama’s head of elections officially certified the results of the special US Senate election, declaring Democrat Doug Jones the next US senator from Alabama. Secretary of State John Merrill had earlier rejected Roy Moore’s request to delay certification of the election, which took place on December 12. Moore […]
News Dec. 28, 2017, 6:23 PM

Roy Moore says he wants Alabama’s secretary of state to delay certification of the state’s US Senate race results, pending an investigation into what his campaign called “election fraud.” Moore alleges fraud contributed to his defeat in the December 12 election, in which his Democratic opponent, Doug Jones, beat him […]
News Dec. 22, 2017, 7:13 AM

Roy Moore, who still has yet to concede, is posting conspiracies and going after Doug Jones’ gay son on Facebook

Republican Roy Moore still hasn’t conceded after last week’s shocking loss to Democrat Doug Jones in the Alabama Senate race. He has posted articles on Facebook calling into question how Jones won the race and highlighting that Jones’ son is gay. It’s been more than a week since embattled Alabama […]
News Dec. 20, 2017, 12:26 AM

Black voters deserve much of the credit for Democrat Doug Jones’ stunning victory in Alabama’s US Senate special election last Tuesday. But some Democrats say the party needs to do more to engage black voters during nonelection years. “It’s time for them to get off their arse and start making […]
News Dec. 17, 2017, 3:43 AM

Former Alabama Senate candidate Roy Moore told supporters on Friday that the race is “not over.” He is collecting donations to investigate incidents of voter fraud. Despite calls from various GOP leaders, including President Donald Trump, to concede the race to his Democratic opponent Doug Jones, Moore remains defiant. Former […]
News Dec. 14, 2017, 3:04 PM

Roy Moore, the Republican Senate candidate who lost the Alabama special election to a Democrat on Tuesday, has not yet conceded. Moore issued a video statement on Wednesday night saying he would wait for Alabama’s secretary of state to certify the results. Roy Moore released a YouTube video on Wednesday […]
News Dec. 14, 2017, 11:39 AM

Write-in votes played a role in Doug Jones’ victory over Roy Moore, and Nick Saban may have been a big factor

Democrat Doug Jones defeated Republican Roy Moore in Alabama’s special election for Attorney General Jeff Sessions’ US Senate seat. The margin of Jones’ victory was smaller than the total number of write-in ballots cast. Nick Saban, the head football coach at the University of Alabama, was most likely a popular […]
News Dec. 14, 2017, 10:00 AM

Trump is in a massive political slump

President Donald Trump suffered another major defeat Tuesday night in Alabama. It was the third consecutive loss for a candidate Trump had supported – and the second in Alabama’s Senate race alone. Luther Strange, Ed Gillespie, and now Roy Moore have all lost crucial races within the past three months […]
News Dec. 14, 2017, 9:00 AM

Democratic Senator-elect Doug Jones pulled off an improbable victory in Alabama on Tuesday. The vote totals contain some eye-popping figures. The results are nearly identical to former Republican Sen. Scott Brown’s shocking 2010 win in a Massachusetts special election. Even amid allegations of sexual misconduct with teenagers hammering his Republican […]
News Dec. 14, 2017, 7:19 AM

Attorney Doug Jones became the newest US senator after he defeated Republican candidate Roy Moore in an upset election win on Tuesday night, topping off an impressive career in law to become the first Democratic senator from Alabama in over twenty years. The son of a steelworker, Jones’ enjoyed an […]
News Dec. 14, 2017, 4:37 AM

The Republican Roy Moore has refused to concede the US Senate race in Alabama despite results showing a clear margin of victory for his Democratic challenger, Doug Jones. Moore is holding out hope for a recount, which would likely only take place if the certified votes show a less than […]
News Dec. 14, 2017, 3:35 AM

Democrats want to pause the tax reform process until Alabama’s Senator-elect Doug Jones is seated. Top Republicans do not seem likely to alter the schedule as the year comes to an end. WASHINGTON – Democrats are rolling out Senate Majority Leader Mitch McConnell’s old quotes about delaying major policy votes […]
Next Page »