The EU stepped back from the harshest sanction on Russia, Donald Tusk lambasted three countries that he said prevented a tougher response. 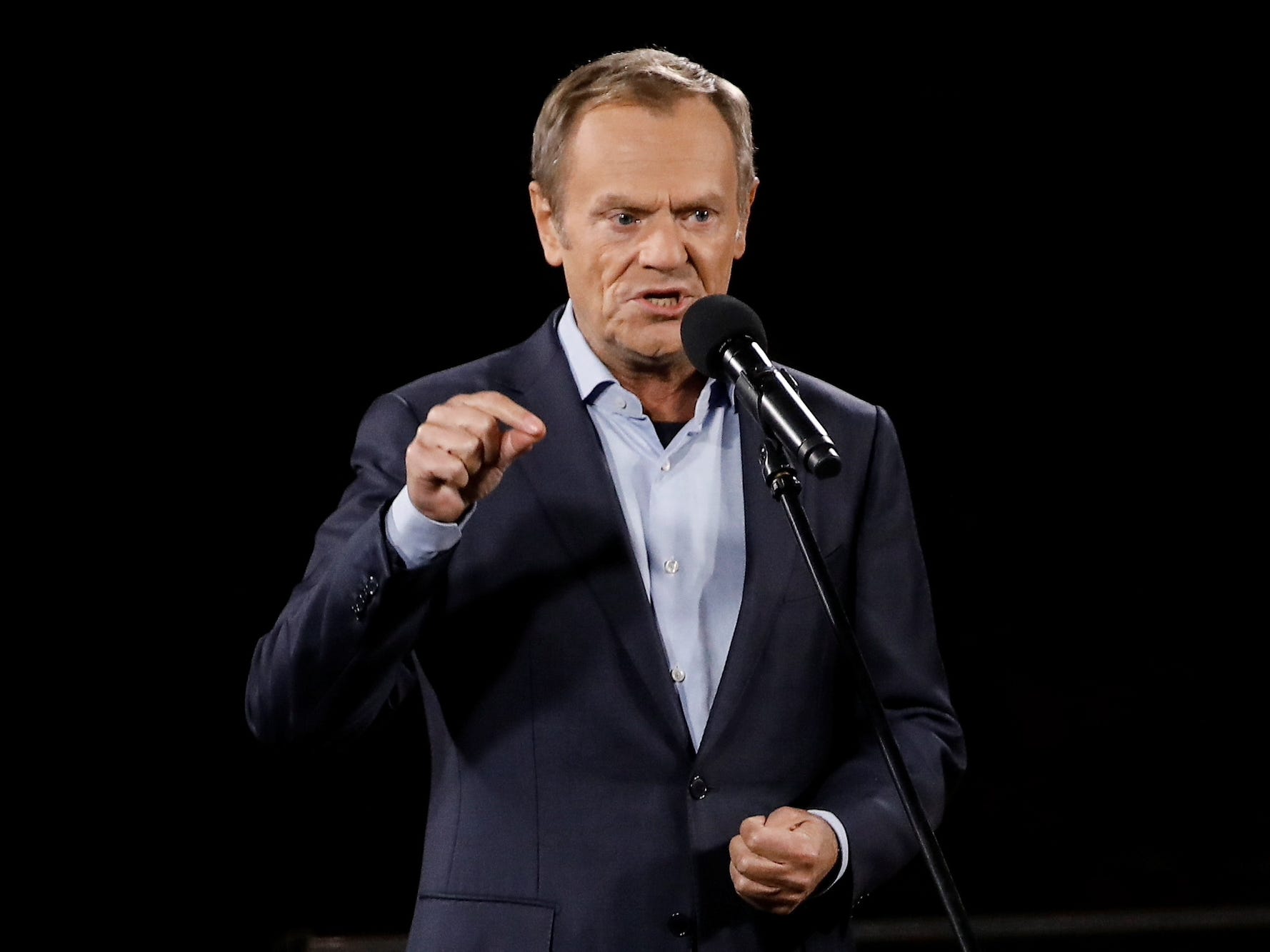 Donald Tusk says Brexit will make the UK a “second-rate player.” The outgoing European Council President said Britain’s departure from the EU would diminish its role in the world. “One of my English friends is probably right when he says with melancholy that Brexit is the real end of the […]
News Oct. 23, 2019, 7:35 AM

Brexit is set to be delayed until next year after European Council President Donald Tusk recommended European leaders accept Britain’s request to extend the Brexit deadline. Tusk said a delay was necessary to avoid a no-deal Brexit. It comes after UK Prime Minister Boris Johnson abandoned his bid to force […]
News Oct. 16, 2019, 2:13 AM

The EU and the UK are reportedly “closing in” on a Brexit deal. Bloomberg report that talks could conclude as early as Tuesday amid suggestions of a breakthrough in Brussels. Talks re-opened following a crucial meeting between UK Prime Minister Boris Johnson and Irish Prime Minster Leo Varadkar last week. […]
Markets Oct. 12, 2019, 12:41 AM

The pound is surging after the EU agreed to enter Brexit “tunnel” negotiations with Boris Johnson, increasing the hopes of a deal. Earlier, Business Insider reported that Michel Barnier, the EU’s chief negotiator, was given the go-ahead by member states to enter into detailed discussions with the UK government. The […]
News Jul. 20, 2019, 12:11 AM

President Donald Trump has been condemned by leaders from the United Kingdom, Canada, Germany and New Zealand, over racist tweets he made telling first-term congresswomen to “go back” to the “totally broken and crime infested places from which they came.” Trump’s attacks were directed at Democratic Reps. Alexandria Ocasio-Cortez of […]
News Apr. 16, 2019, 7:05 PM

Donald Tusk says opponents of Brexit must not give up “dreams” of it being cancelled. “At this rather difficult moment in our history, we need dreamers and dreams. We cannot give in to fatalism,” the European Council President told MEPs in Strasbourg on Tuesday morning. He urged EU politicians not […]
News Feb. 7, 2019, 6:12 AM

European Council President Donald Tusk makes inflammatory remarks about those backing Brexit in the UK. He says there is a “special place in hell” for those who campaigned for Brexit without an exit plan. Tusk also lashes out at those who failed to persuade the British people to stay in […]
News Oct. 4, 2018, 10:53 PM

European Commission president Donald Tusk lashes out at the UK foreign secretary after he compares the EU to Soviet Russia. Tusk calls the comparison “insulting” and a failure of respect. Relations between Tusk and the UK government have been strained in recent weeks with Tusk openly mocking May on social […]
News Sep. 21, 2018, 6:49 PM

Theresa May has been humiliated by EU leaders who unanimously rejected her plans for Brexit. European Council President Donald Tusk openly mocked her on social media. Conservative MPs from all sides are now rounding on May in order to force her to drop her so-called Chequers plan. The row comes […]
News Jul. 18, 2018, 11:44 AM

The European Union and Japan just signed a new trade deal, and it shows how the rest of the world is fighting back against Trump’s attacks

The European Union and Japan reached a major free trade deal on Tuesday. European Council President Donald Tusk said the deal showed that the EU and Japan “stand together against protectionism.” The move is another example of how many governments – from the EU to Canada to even China – […]

The EU head hits back at Trump calling them a ‘foe’: ‘Whoever says we are foes is spreading fake news.’

European Council President Donald Tusk hit back after President Donald Trump called the European Union a “foe” of the United States. Tusk defended the close relationship between the US and EU, calling any other characterization of it “fake news”. Trump’s comments double down on his criticism of NATO member countries […]
Markets Jul. 16, 2018, 6:57 PM

EU Council president Donald Tusk warned that trade wars can turn into “hot conflicts” in his opening statement at the EU-China Summit on Monday. Tusk called for the EU, Russia, US and China to work together to reform the world order rather than destroy it. “There is still time to […]
News Mar. 1, 2018, 8:16 PM

David Davis says Britain will refuse to pay its Brexit divorce bill unless Brussels backs down on demands to keep Northern Ireland aligned with EU rules after Brexit. He told MPs Britain would not finalise any payments to the EU until “all of the issues” concerning Britain have been resolved. […]
News Jan. 16, 2018, 9:11 PM

EU Council president says Brexit can be stopped: ‘Our hearts are still open for you’

Brexit can be stopped if Britain changes its mind, EU Council president says. “Wasn’t it David Davis himself who said ‘if a democracy cannot change its mind, it ceases to be a democracy’?” Donald Tusk said on Tuesday morning. Theresa May insists there will be no second referendum on Britain’s […]
News Dec. 4, 2017, 8:45 PM

Theresa May set to meet with Jean Claude Juncker and Donald Tusk to settle Britain’s Brexit divorce deal. The two sides remain at odds over several major issues. However, the UK government is hopeful a deal can be done on EU citizens rights, Northern Ireland and the divorce bill. The […]
News Nov. 24, 2017, 8:06 PM

Theresa May will meet European Council President Donald Tusk on Friday. The prime minister is expected to offer an increased offer for the Brexit financial settlement. Michel Barnier, the EU’s chief Brexit negotiator, accused of “backtracking” as deadline for the divorce bill is loosened. LONDON – Theresa May is set […]
News Nov. 18, 2017, 3:39 AM

Brexit trade negotiations delayed by the EU until Xmas

EU confirms that while "internal" talks about a...