Trump is said to have discussed pardoning his 3 eldest children, Jared Kushner, and Rudy Giuliani

President Donald Trump discussed preemptive pardons for his three eldest children – Donald Trump Jr., Eric Trump, and Ivanka Trump – as well as his son-in-law, Jared Kushner, The New York Times reported Tuesday. It is legal for a president to pardon family members, though it remains unclear what crimes […] 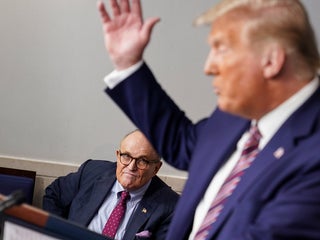 Donald Trump Jr., Sen. Ted Cruz, and other high-profile Republicans shared a viral news story in early August about Black Lives Matter protesters burning “a stack of Bibles” in front of a courthouse in Portland. According to The New York Times, the story was seeded by a Russian news agency […] 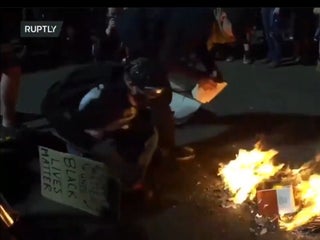 President Donald Trump acknowledged in a tweet that the purpose of the controversial 2016 meeting at Trump Tower was to seek “information” on then-Democratic presidential candidate Hillary Clinton. Trump also dismissed reports that he fears for his son, Donald Trump Jr., in special counsel Robert Mueller’s probe. On Saturday, multiple […] Michael Cohen, President Donald Trump’s former personal attorney, says Trump knew in advance that senior campaign officials planned to meet with a Kremlin-linked lawyer offering dirt on Hillary Clinton at the height of the election, CNN reported. The report says Cohen claims he and several others were present when Donald […] Rudy Giuliani: I ‘would be surprised’ if Trump knew about 2016 meeting with Russians

President Donald Trump’s personal attorney Rudy Giuliani said he finds it unlikely that the president would have been aware of a controversial 2016 Trump Tower meeting. Giuliani was responding to the Senate Judiciary Committee’s release of roughly 2,000 pages of documents on the meeting. ALSO: Giuliani weighs in on new […] Donald Trump Jr. couldn’t remember who was at the other end of a mystery 4-minute phone call — Mueller might have the answer

People are zeroing in on a four-minute mystery call between Donald Trump Jr. and a blocked number. That discussion took place just days before a controversial June 2016 Trump Tower meeting between top Trump campaign officials and Russians. Special counsel Robert Mueller could uncover the identity of that caller, one […] Donald Trump Jr. explains his infamous initial response to possibly getting dirt on Hillary Clinton from the Russians

In closed-door testimony to the Senate Judiciary Committee released Wednesday, Donald Trump Jr. explained his infamous “if it’s what you say I love it” response to music publicist Rob Goldstone in an email exchange preceding a June 2016 Trump Tower meeting with a Kremlin-connected lawyer. Goldstone said Russia could provide […] Donald Trump Jr. on Wednesday responded to the Senate Judiciary Committee’s release of transcripts of closed-door interviews related to the June 2016 Trump Tower meeting with a Kremlin-connected lawyer. “The public can now see that for over five hours I answered every question asked and was candid and forthright with […]

A decade-old quote from Donald Trump Jr. resurfaced in a New York Times column over the weekend. “In terms of high-end product influx into the US, Russians make up a pretty disproportionate cross-section of a lot of our assets,” Trump Jr. said during a conference in New York in 2008. […] Several members of the Trump campaign received an email last September with a link to stolen DNC emails and a decryption key to access them. The email was sent from someone claiming to be Michael J. Erickson. An attorney for Trump Jr. has insisted no one on the Trump campaign […] Democratic members of the House Intelligence Committee said their Wednesday interview with Donald Trump Jr., was unhelpful to their ongoing investigation of Russian meddling in the 2016 US election. Rep. Jackie Speier told CNN her takeaway was that Trump Jr. “has a very serious case of amnesia,” and said he […] A notorious far-right blogger may have provoked WikiLeaks’ outreach to Donald Trump Jr. Donald Trump Jr. released his conversation with Wikileaks — but it might not prove his innocence Donald Trump Jr. made senior Trump campaign staff, including Kushner and Bannon, aware that he was in touch with WikiLeaks