WikiLeaks founder Julian Assange plans to call a witness at his extradition trial who will allege that Assange was offered a presidential pardon if he denied Russia’s involvement in hacking the Democratic National Committee before the 2016 election. According to an Al Jazeera reporter, the person said to have made […] 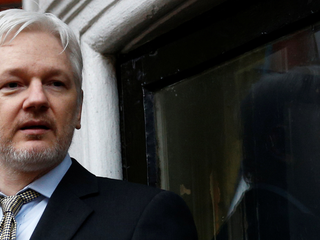 President Donald Trump brought up an unsubstantiated conspiracy theory about the Russia investigation and the hack of the Democratic National Committee during a phone call with Ukrainian President Volodymyr Zelensky on July 25. After reminding Zelensky that the US does “a lot for Ukraine,” Trump asked Zelensky to “find out […]

Hillary Clinton responds to Julian Assange’s arrest: ‘He has to answer for what he has done’

Hillary Clinton on Thursday responded to news that Wikileaks founder Julian Assange was arrested at the Ecuadorean embassy and may be extradited to the US to face charges related to hacking classified documents. Speaking at an event in New York on Thursday, Clinton said Assange should “answer for what he […] Michael Cohen will tell Congress this week that President Donald Trump knew, when he was a Republican presidential candidate, that the GOP strategist Roger Stone was in touch with WikiLeaks founder Julian Assange about a planned document dump days before the Democratic National Convention in 2016. According to prepared testimony […] The special counsel Robert Mueller reportedly has several emails from 2016 between the GOP strategist Roger Stone and the far-right commentator Jerome Corsi. In the emails, the two men discuss WikiLeaks’ upcoming document dump. In one email, sent three days after WikiLeaks published its first batch of hacked Democratic National […] The special counsel Robert Mueller is said to have focused on two key areas in his questions to President Donald Trump about potential collusion with Russia. Mueller asked Trump about the Russian government’s hack of the Democratic National Committee and whether he knew anything about it at the time. Mueller […] The special counsel Robert Mueller reportedly has evidence suggesting that a close associate of Roger Stone may have had advance knowledge that emails belonging to the Hillary Clinton campaign were hacked and handed to WikiLeaks. Mueller’s team is also investigating whether the associate, Jerome Corsi, passed that information along to […]

The special counsel Robert Mueller has subpoenaed Jerome Corsi, a far-right political commentator and conspiracy theorist, to testify in the Russia probe. Corsi’s lawyer said the subpoena was not specific, but that he believes prosecutors will ask Corsi about his relationship with the GOP strategist Roger Stone, who has long […] Mueller found that the Russian hacker scheme was dependent on bitcoin, and it may have gotten them caught Roger Stone says he could be indicted by Mueller

Longtime GOP strategist Roger Stone said he thinks “it is a possibility” he could be indicted as part of special counsel Robert Mueller’s Russia probe. Stone has drawn scrutiny for being in touch with WikiLeaks and the Russia-linked hacker Guccifer 2.0 during the 2016 election. He also said he “communicated” […] The special counsel Robert Mueller has subpoenaed Ted Malloch, a controversial academic with ties to Republican strategist Roger Stone and Brexit leader Nigel Farage, to testify in the Russia probe. Malloch said investigators questioned him about his relationship with Stone, his involvement in President Donald Trump’s campaign, and whether he […] DNC hacker ‘Guccifer 2.0’ was reportedly confirmed as a Russian agent after forgetting to conceal his identity online President Donald Trump’s lawyers are reportedly considering agreeing to an interview with special counsel Robert Mueller. But only if he meets one of two conditions. Either Mueller must agree that he will wrap up the portions of the Russia probe specific to Trump within a set time period – like […] Trump splits from the intelligence community: ‘Other countries and other individuals’ may have meddled in the 2016 election

President Donald Trump doubled down on his claim Tuesday that Russia alone may not have interfered in the 2016 US election, saying it could have been “other countries and other individuals.” The statement marked yet another public fracture between the president and the US intelligence community, which concluded last year […]

Russian President Vladimir Putin told NBC’s Megyn Kelly last week that he would “never” extradite the 13 Russian nationals who were charged by special counsel Robert Mueller with conspiring to interfere in the 2016 US election. He denied any knowledge of their actions and added that the defendants “do not […] The special counsel Robert Mueller is reportedly building a criminal case against Russians who were involved in the hack of the Democratic National Committee in 2016 and the distribution of stolen materials. Public reporting indicates Mueller has zeroed in on the DNC hack in recent weeks, and whether members of […] For the first time, Mueller looks to be moving ‘up the food chain’ to ensnare Trump in the Russian collusion probe

The Russia investigation took a significant step forward when reports surfaced Wednesday that the special counsel Robert Mueller was questioning witnesses about what President Donald Trump knew about Russia’s hack of the Democratic National Committee. While Trump is a focus of the obstruction-of-justice thread of the investigation, he has not […] Special counsel Robert Mueller is probing what, and how much, President Donald Trump knew about the Russian government-backed effort to hack the Democratic National Committee, and the subsequent release of stolen emails at the height of the 2016 campaign. Mueller is also looking into Trump’s relationship with Roger Stone, a […] This past weekend, President Donald Trump fired off more than a dozen tweets about Russia following the latest charges in the investigation into Russian election meddling. Trump alternated between declaring his innocence, blaming former President Barack Obama for Russia’s election interference, accusing Hillary Clinton of collusion, and suggesting the FBI […] The FBI decided to investigate whether President Trump’s campaign colluded with Russia after early foreign-policy adviser George Papadopoulos told a top Australian diplomat that Russia had compromising information on Hillary Clinton, The New York Times reported. Though there were several events that prompted the bureau to investigate the campaign, Papadopoulos’ […]