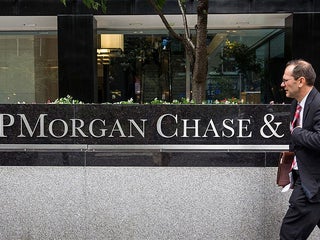 Deutsche Bank surged as much as 14% Thursday morning after gaining a major investment from fund giant Capital Group. The fund manager revealed a 3.1% stake in the bank in Frankfurt on Thursday, Bloomberg reported. Capital Group is now Deutsche Bank’s third-largest shareholder. The investment arrives as Deutsche Bank continues […] Deutsche Bank has reportedly sold $US50 billion worth of assets tied to emerging market debt to Goldman Sachs, according to a report from Bloomberg. The sale is part of a broader effort by the struggling German bank to offload business areas where it has struggled to compete, the report found. […] London-based Barclays has reportedly lured hedge fund clients with $US20 billion worth of balances from Deutsche Bank, according to reports from Reuters and CNBC. Goldman Sachs and JPMorgan were also trying to convince Deutsche Bank’s clients to jump ship, CNBC reported, citing sources with knowledge of the matter. The embattled […] Deutsche Bank is paying “danger money” to lure a team of bankers from Credit Suisse to boost its wealth management business, according to a Financial Times report. The struggling lender reportedly offered the bankers pay raises of up to 40% and to match their 2018 bonuses, the report said. In […]