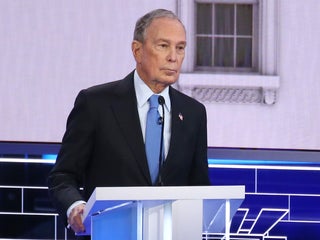 Former Vice President Joe Biden slipped up during Thursday night’s Democratic primary debate, referring to one of his close rivals for the party’s presidential nomination, Bernie Sanders, as “the president.” Sanders and Biden clashed over healthcare policy during the debate. “For a socialist, you’ve got a lot more confidence in […] Night two of the second Democratic primary debate began with a bang. The stage featured 10 candidates, including the frontrunners Joe Biden and Kamala Harris, who had numerous feisty back-and-forths throughout the night. Overall it was a rough debate for Biden and Harris, however, as well as for candidates like […] Joe Biden got skewered for asking Kamala Harris to ‘go easy on me, kid’ as they took the stage for the second Democratic primary debate

Former Vice President Joe Biden’s first words to Sen. Kamala Harris, as they took the stage for the second Democratic primary debate were, “Go easy on me, kid.” The line was a likely reference to when Harris memorably excoriated Biden during the first debate for his record on race and […] The 10 2020 Democratic presidential candidates who faced off on the first night of the first primary debate on Wednesday were all asked what they think is the biggest geopolitical threat facing the US. The question drew a wide array of responses, including China, Iran, Russia, climate change, and nuclear […] ‘Excuse me, I’m talking’: Watch Clinton and Sanders spar over Wall Street at the Democratic debate Good news for cord cutters: CNN will provide a...