AMERICAN RESILIENCE: A decade after recovering from the Deepwater Horizon oil spill that left their beaches covered in tar, Gulf towns face another existential threat — the coronavirus pandemic

Tourism along the Gulf of Mexico came to a screeching halt in 2010 after the Deepwater Horizon oil spill covered Texas, Lousiana, Alabama, and Florida resort towns’ once-pristine beaches with tar. Tourism eventually recovered and exceeded its pre-spill levels, thanks in part to BP’s aggressive cleanup program and national advertising […] 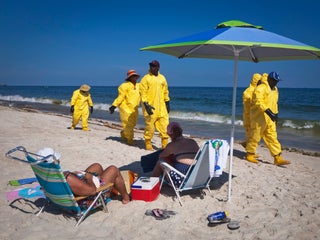 BP CEO Bob Dudley, who steered the oil giant from bankruptcy after the Deepwater Horizon spill, is stepping down

BP CEO Bob Dudley is set to step down from the role in 2020, after spending more than 40 years at the oil-giant. He will be replaced by 49-year-old Bernard Looney, the company said in a statement. Dudley, who has been chief exec for nine years, is widely credited with […] Researchers at Argonne National Laboratory have... BP boss: The Gulf of Mexico oil spill was a ‘near death experience’ for us The company is getting crushed by oil prices, ruble drops and sentences over Louisiana. This 13-year-old is trying to save the world... These Photos Of The 2010 BP Oil Spill Are Weirdly Mesmerising BP And The State Of Louisiana Are Basically At War

Only just begun to fight. The key is "surface tension." Halliburton has agreed to plead guilty to destruction of evidence in the Deepwater Horizon oil drilling tragedy. [credit provider=”Mario Tama/Getty Images” url=”http://www.gettyimages.com/detail/news-photo/dead-crab-is-seen-in-a-piece-of-marsh-ravaged-by-the-news-photo/112289265#”] The BP Deepwater Horizon oil spill began on April 20, 2010 and lasted 87 days, releasing about 4.9 million barrels of oil into the ocean from a mile deep well.In response to the largest oil spill in US history more than 1 million gallons of […] [credit provider=”Flickr/SkyTruth” url=”http://www.flickr.com/photos/skytruth/4543311558/”] Energy technology: As oil exploration moves into the Arctic, new methods are being developed to detect and handle spillsAn oil well suffers a blowout, causing a fatal explosion on an offshore platform. Oil spews into the water at an estimated rate of 53,000 barrels a day. The Real Criminals At BP Are Getting Off Scot-Free

The Justice Department just entered into the largest criminal settlement in U.S. history with the giant oil company BP. BP plead guilty to 14 criminal counts, including manslaughter, and agreed to pay $4 billion over the next five years. The BP Prosecutions Show A New Strategy For The Justice Department

[credit provider=”Flickr/Infrogmation” url=”http://www.flickr.com/photos/infrogmation/4654839046/”] The feds’ indictment Thursday of two BP supervisors on the doomed Deepwater Horizon rig signals a renewed effort to punish managers for major disasters, The New York Times reports.Going after supervisors for big tragedies like Deepwater has been unusual in recent years and was more common in […] [credit provider=”Flickr/SkyTruth” url=”http://www.flickr.com/photos/skytruth/4543311558/”] Last night, one of the most contentious portions of the debate was the back and forth between the president and Mitt Romney over energy policy. Obama correctly pointed out that domestic oil production was on the rise in America and drilling permits for federal land were on the […] The DOJ Might Settle Its Beef With Transocean For $1.5 Billion

[credit provider=”Flickr/SkyTruth” url=”http://www.flickr.com/photos/skytruth/4543311558/”] Transocean Ltd. and the U.S. Justice Department have discussed a $1.5 billion settlement that would resolve federal civil and criminal claims against the company over its role in a deadly 2010 rig explosion that spawned the nation’s worst offshore oil spill.But Switzerland-based Transocean said in a regulatory […]