Quantum computing, climate change, and interdependent AI: Academics and execs predict how tech will revolutionise the next decade

The past decade saw technological advancements that transformed how we work, live, and learn. The next one will bring even greater change as quantum computing, cloud computing, 5G, and artificial intelligence mature and proliferate. These changes will happen rapidly, and the work to manage their impact will need to keep […] A new PwC survey unveiled at Davos found CEOs are the most pessimistic they have ever been about the economy. The firm’s global chairman breaks down 4 big reasons why.

The opening day of the World Economic Forum Annual Meeting in Davos, Switzerland featured the release of PwC’s latest CEO survey. It found that CEO pessimism about global growth is currently at a record high. The lack of confidence in the world economy is jarring, especially considering the strength of […]

The World Economic Forum (WEF) postponed its annual meeting in Davos-Klosters, Switzerland from January 2021 to “early next summer.” Countless business leaders, 53 heads of state, and a handful of celebrities attended last year’s meeting, and the program featured big names including President Trump, Greta Thunberg, and Marc Benioff. The […] 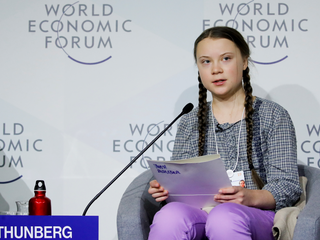 President Donald Trump gave a rambling, 30-minute speech at the World Economic Forum’s annual meeting in Davos, Switzerland, on Tuesday. There he lauded US economic achievements, including his recent trade deals with China and Mexico, and his administration’s efforts to improve the US economy. “America is winning again like never […]

Greta Thunberg and Trump will face off again at Davos. Here’s what happened the first time they met, and what they have said about each other since.

The World Economic Forum’s annual summit at Davos runs from Tuesday to Friday this week. Teen climate activist Greta Thunberg and President Donald Trump are both attending, and could see each other again. Last time they saw each other, at the UN General Assembly in New York last September, Thunberg […] Halloween is back: People are shelling out for candy, costumes, and...

A Pennsylvania man who called 911 died after dispatch hung up...

I worked out like Jennifer Aniston for a week, and I...