The multitrillion-dollar global automotive industry is changing, but not the way you might expect. Here’s how that change is unfolding.

“Disruption” has become the buzzword of buzzwords in the transportation industry. But the supposed disruption isn’t true disruption at all – it doesn’t fit into Clayton Christensen’s theory of disruptive innovation, as explored in his book “The Innovator’s Dilemma.” Nonetheless, automakers are actually disrupting themselves from within. The “disruption within” […] 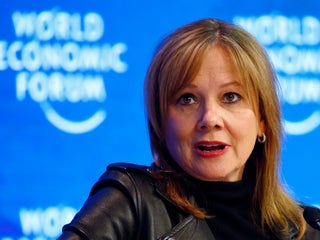 The race to commercialize self-driving vehicles is heating up, as billions of dollars have been invested in Cruise and Argo AI, while Waymo is bringing autonomy to market and Tesla hopes to bring 1 million robo-taxis online by 2020. A group of key executives has emerged in the self-driving-car business. […] The autonomous-driving startup Cruise Automation, which was acquired by General Motors in 2016, is facing technological issues as it seeks to launch an autonomous ride-hailing service by the end of this year, The Information‘s Amir Efrati reported on Friday. Among the issues reportedly experienced by Cruise vehicles are near-accidents, getting […] GM and Honda are joining forces on self-driving cars with a $750 million Honda investment making GM Cruise worth $14.6 billion

GM will join Honda in developing a “purpose-built autonomous vehicle” for Cruise, GM’s self-driving division. Honda says it will invest $US2 billion over 12 years, with an additional $US750 million invested in Cruise. Honda’s equity investment raises Cruise’s valuation to $US14.6 billion. General Motors announced Wednesday that it has allied […] GM’s$US2.25-billion SoftBank investment in the Cruise division has given the company equity value that it can use to attract new talent. Cruise has grown dramatically since GM bought it in 2016. What started as a 40-employee startup now has 800 people working it. GM President Dan Ammann said that another […] GM announced a management realignment on Thursday, addressing its Cadillac luxury brand and it multi-billion-dollar investments in its Cruise self-driving division. Cadillac will now be overseen directly by product head Mark Reuss, while GM President Dan Ammann focuses on Cruise commercialization in 2019 and an ongoing $US2.25-billion investment in Cruise […] GM is reportedly thinking about spinning off its Cruise self-driving division. A recent $US3.35 billion investment by GM and SoftBank valued Cruise at $US11.5 billion. GM’s market capitalisation is just over $US50 billion. GM acquired Cruise in 2016. Wall Street has been agitating for GM to unlock valuable parts of […] SoftBank will invest $US2.25 billion in General Motors‘ Cruise division. GM will follow with a $US1.1 billion investment. GM acquired Cruise Automation, a San Francisco startup, in 2016. The scale of the investment puts Cruise’s value at $US11.5 billion. Watch GM trade in real time here. On Thursday, General Motors […] GM and SoftBank are investing $US3.35 billion in GM’s Cruise self-driving division, bringing Cruise’s valuation to $US11.5 billion. Tesla’sAutopilot can’t be similarly valued because it isn’t designed as a stand-alone business but rather as a semi-autonomous feature that customers can purchase. Tesla’s position in electric cars is strong, but its […] The future of self-driving cars hinges on one simple thing

Fully autonomous vehicles are likely to arrive first in fleets. Fleet rollouts will favour competitors who can build self-driving tech into their cars. The traditional auto industry could make use its advantage in mass-production. In Detroit, Silicon Valley, and Europe, a race is on to develop self-driving technologies. Some major […] General Motors on Thursday revealed its fourth-generation self-driving vehicle. It has no traditional manual controls. The automaker expects to roll it out in 2019. No driver. No pedals. No steering wheel. Just seats and screens and doors that can close themselves. That’s what riders will see when they get into […] GM has demonstrated an all-electric self-driving fleet of cars in San Francisco. Tesla continues to struggle to scale up production of its Model 3. In just a few years, the Detroit giant has surged ahead of the Silicon Valley upstart. Earlier this week, General Motors and its Cruise self-driving-car division […] GM told investors on Thursday that it could bring fleets of self-driving cars to market by 2019. The carmaker will generate far more revenue with this business framework. GM shares have rallied this year as the company has tempted investors with its plans for the future. General Motors is going […] GM and Cruise Automation, the self-driving... Fiat Chrysler Automobiles will supply Waymo with 62,000 Chrysler Pacifica minivans for Waymo’s autonomous fleet, the two companies announced Thursday. Waymo could also provide FCA with a licensed self-driving system that could be installed in a future retail vehicle. FCA and Waymo made the announcement on the same day General […] Waymo and Cruise are the two current leaders in the race to commercialize fully autonomous technologies in autos. The companies are taking different approaches. One doesn’t have to lose for the other to win. The two most obvious leaders in autonomous vehicles are Alphabet’sWaymo and General Motors’ Cruise division. Each […]