Canadian cannabis giant Cronos is making moves to enter the US. Its $110 million deal with PharmaCann would give Cronos access to New York’s $7 billion market.

Altria-backed Cronos announced on Monday that its made a deal for a stake in PharmaCann, one of the 10 cannabis companies that operates in New York. 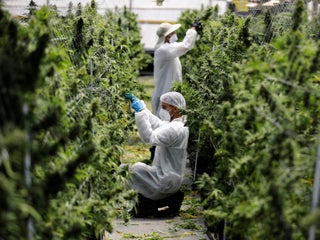 Cronos Group soared as much as 9% in early Thursday trading after surpassing the highest analyst estimate for second-quarter revenue. The company attributed its quarterly success to the newly launched adult-use market in Canada and increased interest in cannabis oil. Cronos’ second quarter saw its acquire CBD-distributor Redwood Holding Group, […] Cronos Group CEO Mike Gorenstein on Tuesday said the company would expand to the US within the next year. Bank of America Merrill Lynch upgraded the stock to “buy” from “underperform.” Shares were up more than 15%. Watch Cronos trade live. Cronos Grou soared more than 15% Wednesday after the […] Cronos is soaring ahead of earnings

Cannabis producer Cronos was up nearly 9% Monday – ahead of its fourth-quarter earnings release due out Tuesday morning. Wall Street analysts expect Cronos’ revenue to have grown by more than 500% over the past year. Watch Cronos trade live. Cronos was up almost 9% Monday, one day ahead of […] Altria‘s $US1.8 billion investment in the cannabis producer Cronos is mutually beneficial, a Cowen analyst says. Cronos has a focus on rare cannabinoids, which has greater potential than just focusing on the two most known cannabinoids, Azer added. Cronos can leverage Altria’s expertise to focus on ingredient composition without reliance […]